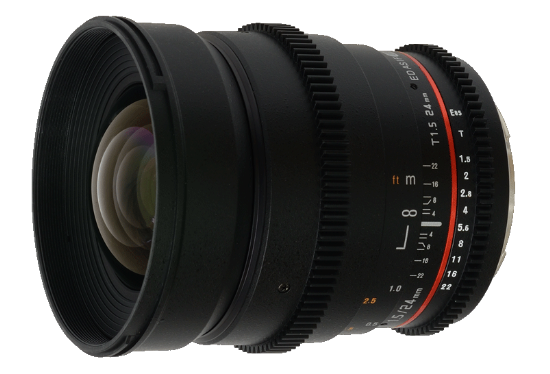 This Canon EF/EF-S 24mm VDSLR version is compatible with both Canon's full frame and APS-C sensors, but is best suited to  full-frame Canon systems, constituting a high-quality wide-angle lens perfect to hire for street, landscape and architecture shooting even in low light conditions. Photographers using Canon APS-C sensors will get approx 38mm field of view (35mm equivalent) suitable for journalism and general photography.

When hiring a motion videography lens it is worth noting that movie camera lenses are rated by a T-number rather than of an F-stop. The F-stop expresses the speed of the lens on the assumption that lens transmits 100% of the incident light. The T-number expresses the actual light transmission.

This lens is pin sharp across all mounts, even at the edges of the frame at wide apertures. It's high speed T1.5 aperture gives a narrow depth of field for seperating subjects from the background and simultaneously allowing much faster shutter speeds in lower light conditions, where normally shutter speeds are decreased.

For film and video applications manual focus is the preferred choice, allowing changing focusing during filming and here are increasing numbers of users using DSLRs for filming and High Definition (HD) video. So it is good news that Samyang's 24 mm T1.5 VDSLR is a manual focus lens, featuring toothed rings compatible with professional geared follow focus systems available in the film industry and likewise a toothed, decoupled (de-clicked) aperture ring.

These modifications allow for smooth and precise control over focus and aperture during filming.

This means when you hire this lens you get ultimate manual control of both focus and exposure when moving from one scene to another with different light intensities, such as changing exposure values (EVs) from inside to outside, or even in-camera fade ins etc.

This Samyang 24mm VDSLR lens also provides a stunning bokeh (the character of out-of-focus areas) effect due to design and fast aperture.