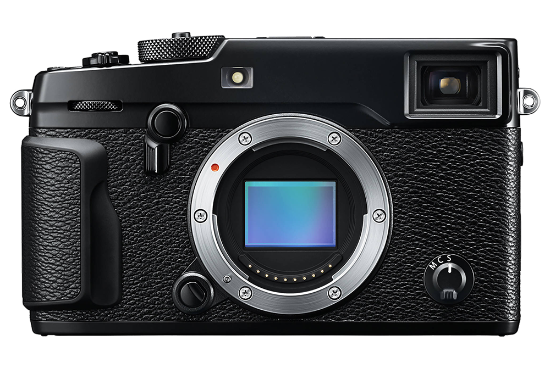 The newly-developed 24.3MP X-Trans™ CMOS III APS-C sensor combined with an XF lens, delivers images with a perceived resolution far greater than the number of pixels used thanks to the removal of the Optical Low-Pass Filter used in many other cameras.

High ISO sensitivity performance has also been improved to the point that the whole sensitivity range - up to the maximum ISO 12,800 in RAW (Extended output sensitivity up to 51,200 in JPEG) - can now be used with confidence.

Thanks to the newly-developed X-Processor Pro engine, processing speeds are now approximately four times faster than a conventional model. This maximises the capability of the X-Trans™ CMOS III sensor to ensure it delivers the highest image quality with super-fast response times.

When combined with the high-speed reading technology of the sensor, the previous generation EVF's display speed of 54fps has been increased to a maximum of 85fps when used in High Performance mode. This substantially reduces the image delay phenomenon when tracking a moving subject.

Finally, blackout time after releasing the shutter has also been reduced by approximately half and lossless compressed RAW is supported, improving the ease-of-handling of RAW data.

Film Simulation modes
Using the knowledge gained from of accurately reproducing colour in film manufacturing, Film Simulation modes allow users to change colour and tone settings to match the subject, scene and creative intent, just as if shooting with a roll of film. There are a total of 15 modes including PROVIA / Standard, Velvia / Vivid and ASTIA / Soft.

Grain Effect
The FUJIFILM X-Pro2 has the ability to reproduce graininess typically unique to film-based images. There are two strengths: Strong or Weak, which can be combined with each of the different Film Simulation modes. It is possible to add the effects after the shot has been taken through in-camera RAW development.

Choose the viewfinder mode to suit your needs
Compose images in the viewfinder using one of three different viewing modesCombining the advantages of both an OVF and an EVF, Fujifilm has perfected the Advanced Hybrid Multi Viewfinder with three viewing options. Now you can return to the roots of photography with the only viewfinder of its kind in the world.

A built-in eye sensor allows the camera to automatically switch between the viewfinder and the LCD screen when the camera is held up to the user's face.

The advanced hybrid multi viewfinder allows you to switch between optical and electronic options with a single lever. The new electronic rangefinder feature is selected in the same way.

Optical Viewfinder (OVF) lets you see outside of the frame.
The OVF is the purest way to shoot. As you look through it, you are simply seeing the real world in front of you, eliminating any possible delay. Additionally, depending on the lens you use, you can see outside of the final frame which makes framing up even easier.

The frame guideline and OVF magnification automatically changes depending on the lens attached.

Electronic Rangefinder (ERF) simultaneously displays a small EVF window in the optical viewfinder.
The EVF is simultaneously displayed as a small window in the optical viewfinder. It can be displayed in three different ways: 100% field of view, 2.5x magnification and 6x magnification. This allows the user to check focus, the angle-of-view, exposure and white balance in real-time, even when taking photos through the OVF. As it can also be used with MF assist, precise MF is now possible in OVF mode.

Electronic Viewfinder (EVF) allows you to see the final shot before you press the shutter
A 0.48-inch, 2.36-million dot EVF allows you to see exactly what the camera sees, including all exposure settings, the depth of field and any film simulation modes.

This is particularly useful when shooting in Aperture or Shutter priority modes, allowing you to use the Exposure Compensation dial to adjust the brightness in front of your very eyes, or when using additional Neutral Density filters.

A new sophisticated design is used for the finder display. Screen information is now even easier to see.

Diopter Adjustment
The optical design of the viewfinder has been improved, moving the eye point from 14mm on the previous model to 16mm. A diopter correction dial is also included, which makes the viewfinder even more comfortable to use.

Fast and accurate AF or simple MF?
For photographers, focusing is an important job. Although AF now reacts faster than the human eye, the appeal and level of trust in MF will never disappear. Manually operating the focus ring to pick out a specific element in the frame is often crucial. Speed isn't always everything.

Phase Detection AF area expanded to 7x7
The number of selectable focusing points has been expanded from 49 on previous models to 77. Approximately 40% of the imaging area is now covered by fast, precise phase detection AF pixels, which means focusing speeds when capturing moving subjects have improved dramatically.

The new dedicated Focus Lever on the back of the camera can be moved like a joystick in eight directions to instantly move the focus area. Now, rapid focus area changes can be made, even when composing an image. Not only is this available to move the AF point during AF mode, but it can also be used during MF mode to quickly move the enlarged display area when using MF assist.

Colour is used to highlight the parts of the image that are in focus. You can choose between White, Red or Blue highlights - the latter two are particularly effective while shooting in a black and white film simulation mode.

A simple body design that maximises practicality
No photographer wants to take their eye from the viewfinder for fear of missing the perfect shot. With this in mind, all of the major exposure settings; aperture, shutter speed and sensitivity, are available on physical dials for quick fingertip control, and all menu buttons have been concentrated on the camera's right side. Exposure changes can be made while the camera is switched off, so users will always be ready for the next photo opportunity. Thanks to the simplicity of the FUJIFILM X-Pro2, you'll soon be creating masterpieces.

The shutter speed and ISO dials have now been combined into one dial, which is reminiscent of those found on old film cameras. Changing the ISO is done by lifting the outer portion of the dial. Now all exposure settings can be performed with dials.

Customisable menus
A maximum of 16 frequently used items can be registered to the new My Menu feature. When combined with the 16 items from the Q Menu, a total of 32 shortcuts can be created.