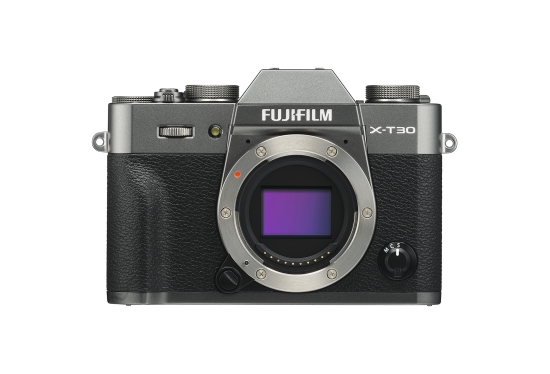 The "Little Giant - X-T30" offers premium image quality at a more accessible price than ever before. Fujifilm X mount.

The new FUJIFILM X-T30, offers similar performance to the FUJIFILM X-T3, in a smaller and lighter body. It has the same phase-detection AF system with almost 100% frame coverage, blackout-free high-speed continuous shooting of up to 30fps, monochrome adjustment function, Colour Chrome effect and Sports Viewfinder mode while also offering functions that cater to the less professional photographer, such as the Advanced SR Auto function as well.

Mirrorless cameras have taken the next leap in expressive capability.

The FUJIFILM X-T30 is the coming together of features developed over four generations of X Series. This includes enhanced image quality and processing speed using the combination of the latest X-Trans™ CMOS 4 sensor and image processing engine, in an even more compact and lightweight body.

The FUJIFILM X-T30 features the X Series' fourth-generation X-Trans CMOS 4 sensor. Boasting a resolution of 26.1MP, the sensor uses the unique X-Trans color filter array to reduce moiré and false colors without the need for an optical low pass filter. Its back-illuminated structure enhances image quality while reducing noise levels and extending the sensitivity to ISO160.

The new X-Processor 4 has a quad-core design to utilize the full potential of the X-Trans CMOS 4 sensor. This combination of processor and sensor is behind the enhanced Film Simulation mode, which enables you to achieve richer colours and tones, as well as significant improvement in the camera's ability to track a moving subject, faster and more accurate autofocus, and enhanced 4K/30P video capabilities.

The number of phase detection pixels in the sensor has been increased to 2.16 million and the phase detection AF area covers the entire frame (approx. 100%), enabling fast and accurate autofocusing. The low-light limit for phase detection AF has been also expanded from +0.5EV in the previous-generation camera systems to -3.0EV.

AF modes available are "Single Point AF" for prioritizing focus on a single chosen point, "Zone AF" suitable for a moving subject, and "Wide / Tracking AF." Each of them can be combined with the AF-S and AF-C modes to create six AF patterns in total:

Capturing a moving subject in a large AF area

Automatically capturing a subject that makes unpredictable movements across the frame

Capturing a subject that makes a linear movement

Automatically tracking a subject that moves across the frame

The FUJIFILM X-T30 can shoot continuously at up to 8.0fps in full resolution when using the mechanical shutter, and offers the Sport Viewfinder mode, which shoots pictures within a cropped area representing approx. 16.6 megapixels (1.25x crop), marked within the viewfinder view, so that you can check the movements of a subject even before it comes into the shooting frame. By using the electronic shutter, the FUJIFILM X-T30 supports blackout-free high-speed continuous shooting of up to 30fps*. When the electronic shutter is selected, you can also choose the Silent mode.

The tracking performance of the "Face- and Eye-detection AF" is twice as good as previous models. The FUJIFILM X-T30 maintains accurate focus on people from the front or side in scenes which were notoriously difficult to track. The eye-detection AF is also supported in the AF-C mode, focus-tracking subject's eyes in portraiture that involves movements. The eye-detection AF can be configured to priority-focus on either right or left eye or the eye closest to the camera. It is a powerful tool in portrait photography, which demands focus accuracy with a shallow depth of field.

"Face Select" function to make sure to capture an important subject

When there are multiple faces within the frame, you can select a specific person on the touchscreen panel or with the Focus Lever so that autofocus and exposure settings are optimized for the subject. "Face Select" is a perfect tool when shooting commemorative photos or shooting a specific person in a large crowd in sports or other events.

Thanks to the 4th generation image sensor and processor, the FUJIFILM X-T30 boasts superb 4K video recording features. It actually records in 6K (6240x3510) to produce stunning quality in 4K (3810x2160). The camera also supports the DCI format (17:9), which gives an even more cinematic look to your videos. The FUJIFILM X-T30 adopts high resolution audio recording without the need for additional accessories. Finally, F-Log recording and 4:2:2 10bit output via the HDMI port are also supported making the camera suitable to produce more professional, fully fledged videos.

The face- and eye-detection AF during Video Recording

Face and eye-detection AF is also available when recording video. Together with the "Face Select" function, you can switch who is in focus while recording by using the touchscreen panel or the Focus Lever.

You can shoot 4K movies using any of the Film Simulation modes. ETERNA, is particularly suitable for video thanks to its subdued colours and rich shadow tones, giving a cinematic look. ACROS delivers monochrome video with fine textures and rich gradation, while CLASSIC CHROME creates a unique atmosphere, reminiscent of vintage reversal films. Velvia gives an option of giving high saturation to video imagery.

A total of 16 Film Simulation options are available, producing rich colours and tones that reflect your creative intentions just as if you were swapping between different types of photographic films. This is a function exclusive to FUJIFILM, developed with the company's colour presentation philosophy and know-how perfected over 80 years of manufacturing photographic film. Diverse options available include PROVIA and Velvia, named after FUJIFILM's own photographic films, as well as ETERNA, which emulates the tones of motion pictures, CLASSIC CHROME, suitable for documentary photos, as well as two types of monochrome filters including ACROS.

Every element of the design has been made with the photographer in mind, from the dial-based operation to the compact, lightweight body. The FUJIFILM X-T30 uses the latest generation APS-C sensor to record every picture in the highest quality and has an aesthetically-pleasing design that evokes a passion for capturing the moment, helping to immerse yourself into the world of photography. In addition, the camera incorporates numerous convenient features such as the touchscreen rear LCD panel and a well-hidden, built-in flash.

The FUJIFILM X-T30 features an EVF with approx. 2.36 million dots and the magnification ratio of 0.62x. This is brighter and a higher resolution than previous models, and offers a magnification ratio equivalent to DSLRs. With a display time lag of just 0.005 seconds and refresh rate of 100fps, the EVF allows you to identify your subject's movements quickly and accurately. Unlike a DSLR, the EVF helps you see exactly what the sensor will capture, with the effects of Film Simulation and exposure reflected in real time so that you can shoot without checking how the settings affect the final image.

The FUJIFILM X-T30 features a 3.0-inch tilting touchscreen LCD monitor that has a 3:2 aspect ratio and approx. 1.04 million dots. The tilting design enables easy shooting from high and low angles. All shooting information, normally displayed on the monitor, can be turned off if you want to concentrate on taking the picture.

Equipped with a capacitive touchscreen panel, the FUJIFILM X-T30 allows touch-based controls during shooting, such as "Touch AF," "Touch Focus Area Selection," "Touch Shot" and "Touch Function". This capability means you can move your focus area faster and more intuitively than ever before or simply use a swipe motion to scroll through images when reviewing. Adjust the AF area using the touchscreen while looking through the viewfinder

The FUJIFILM X-T30 uses an eight-direction lever instead of the traditional 4 way selecter buttons. This gives the camera's compact body extra room to grip the camera for added stability. At the same time, the grip thickness has been increased so the camera sits more comfortably in your hand.

The FUJIFILM X-T30 can be paired with a smart device with Bluetooth® for always on connection*, enabling automatic transfer of pictures you take to share quickly on social media. The connection also enables other functions, such as remote shooting from a smartphone / computer, viewing of pictures taken on your device, and printing direct to an Instax printer.