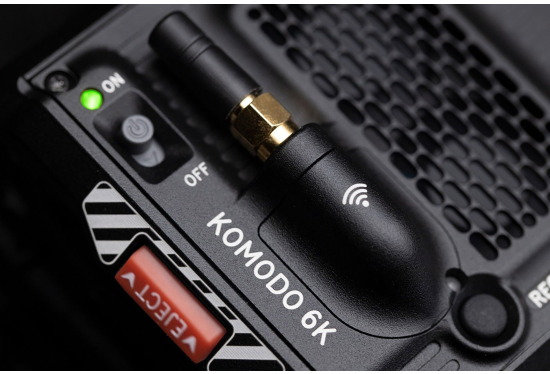 Register your interest in hiring the RED Komodo via the button below and you will be notified when it is in stock and available for hire. This page will be updated when the specification has been finalised by RED.

Loading hire rates...
This product is not currently available. Register your interest below and we will contact you when it is in stock.
Add to Waiting List

The RED Komodo hasn't been officially announced yet. Specifications below are subject to change and have been taken from ProAV, who have gathered information from REDuser.net & Instagram from RED employees.

RED's CEO Jarrard Land has been posting teasers about the RED Komodo on both REDuser.net and Instagram since before IBC last year and over the last few months it has been looking more and more like a finished camera isn't far away. Final mechanical drawings have been seen, probably so that third party manufacturers can get to work on accessories. The more we hear, the more exciting the Komodo seems, so let’s go over what we know.

What is known so far?

It will not be a replacement for RED's current DSMC2 camera line-up, it will be seen as a B-cam/ auxiliary camera to DSMC2, however it seems to be shaping up to a very exciting entry-level camera for the RED ecosystem.

Exact dimensions and resolutions are as yet unknown, but RED have hinted that the Komodo's 6K sensor will be capable of a dynamic range that is less, but gets close to, their Helium sensor – which DXOMark rate at 15 stops of dynamic range. Hopefully this means the Komodo's dynamic range will be around 14 stops.

Mechanical drawings show the camera body itself is essentially a 10cm cube. This is 2/3rds of the physical size of RED’s DSMC2 brain's, plus you don't need to attach a module – which often makes DSMC2 larger than just the dimensions of the brain itself. So Komodo will feel significantly smaller than the DSMC2 cameras, and they aren't exactly large cameras in the cinema world anyway.

It seems Jarrad Land has spent a lot of time on REDuser.net, focusing on the global shutter mode, and rightly so, as this could be a huge step forward for the camera market. RED claims the Komodo can switch between global shutter and rolling shutter modes. In addition to this, they later updated to say they have minimised any dynamic range differences between the two modes, which is very impressive. Because of this they are potentially making the Komodo a global Shutter only camera, which will be fantastic for handheld work and action filming. It will be very interesting to see what the final sensor technology looks like once the camera is released.

One of RED's biggest strengths has always been their Redcode raw format. It makes an 8K 16-bit raw workflow possible, no matter the scale of your project, by offering precise control over your compression level. You have the large files for large productions, and compressed smaller file sizes for smaller, quick work, all remaining in 16-bit raw, it’s an incredibly flexible and powerful system. It's said that the Komodo will record in Redcode rather than some other format, but whether we get the full flexibility of their larger cameras will remain to be seen.

For many, RED's choice of an RF mount for the Komodo was a big surprise, however it makes a lot of sense. This will be the first cinema camera with an RF mount, so it’s likely that third party companies will create all sorts of adapters to EF and PL etc. due to RF's short flange distance. Canon already has an RF to EF adapter, along with a second version which has a slot for a variable ND adapter. Using this will give the Komodo an EF mount, and a built-in variable ND filter, a very welcome upgrade.

This will be RED's first camera with full continuous autofocus with phase detect technology built into the sensor itself. This is very exciting, as for the sort of work Komodo will be perfect for (crash cameras, car rigs, gimbal work etc.), reliable autofocus is incredibly useful. However we do have to manage expectations here a little, making autofocus reliable is a software game, and this is RED's first attempt at something that companies like Canon and Sony have spent years perfecting. Jarrad Land even hinted it might ship without AF and be introduced later, we will have to wait and see. But if RED can get this right, it will be a very useful addition to their line-up.

RED has moved away from its proprietary media format, the Mini Mag, and given the Komodo a single CFast 2.0 card slot. This is one of the main steps which will make the Komodo a great choice for entry level users, and will open up a world of more affordable media options from companies like Sandisk, Wise, Angelbird and more.

On the back of the Komodo are two Canon BP battery slots, this is Canon’s older BP style of battery, not the newer BP-A batteries that are used on the C200 and C500 II. This means that more affordable batteries, like the Canon BP-955, SWIT S-8845 and Hawkwoods DV-955 can be used.

The Komodo will have a built-in touch screen on the top of the camera, kit will likely be small, but will show you your image preview as well as providing full touch-screen control of the menus. When using a gimbal, rigging in tight spaces or even when shooting handheld, this will be really useful, however for most work, it will definitely be worth considering a third-party monitor such as a SmallHD Focus SDI or a 7" SWIT CM-S75F.

An interesting feature of this screen is a newly designed RGB raw exposure tool similar to the traffic lights tool on the DSMC2 UI, it provides a really quick and easy way to spot clipping in your raw data.