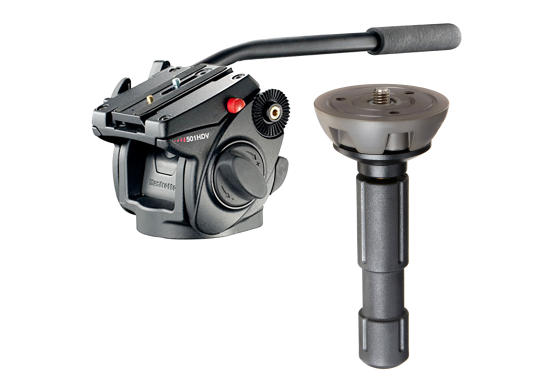 The perfect set up for use with the Indie Dolly Systems 'Singleman Dolly' at floor level, without a tripod.

Head features a secondary security lock so you can't accidentally release the plate (and camera). The lock stops the quick release lever from opening fully.
Special Teflon-coated discs (used instead of fluid cartridges) ensure smooth movement and consistent friction of the head.
With a separate lock on each axis of movement, this head can be precisely adjusted, and panning/tracking can be achieved on any axis.
Two separate axes of movement - panoramic rotation and front-rear tilt
The pan bar uses the principle of the lever to use less effort to support and move the weight of your camera and to iron out any jarring or shaking movement between your arm and the camera. Ideal for equipment used in movement - especially video cameras and sport optics / spotting scopes - but also very popular among sports and nature photographers who use long heavy lenses and need to smoothly track moving subjects.

The Manfrotto 520BALL 75mm Half Ball is designed to facilitate quick leveling of a 75mm ball head with the 3283 tripod, and has a 3/8"-16 threaded screw. It can also be used with the Gitzo G-1422 75mm Bowl Interface Adapter to provide an economical and low profile levelling base with any of the Gitzo Series 3 Systematic tripods (which feature an interchangeable top plate that accepts rapid or geared center columns as well as levelling bases).

The perfect set up for use with the Indie Dolly Systems 'Singleman Dolly' at floor level, without a tripod.