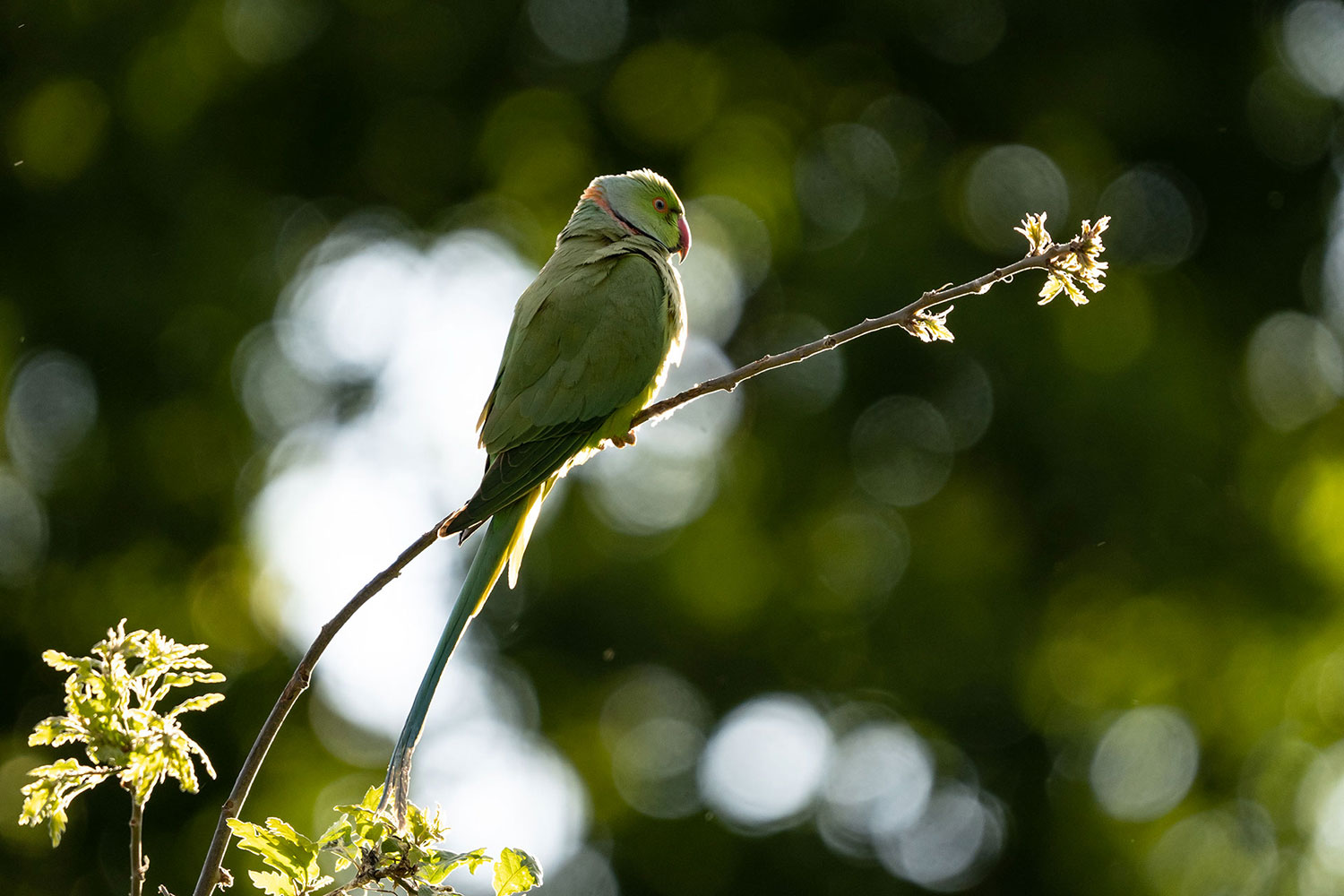 With grand landscapes out of reach during lockdown, Richard Sibley turned his hand to photographing the parakeets that regularly visit his garden. Over to Richard!

I have never been interested in photographing garden birds. I mean, I like watching the robins patrol the garden, the blackbirds scooping up worms at dawn and dusk, and the blue tits flocking to eat the greenfly, but as a photographic subject I have no interest. Then came lockdown.

Restricted to the confines of a South East London garden, my photographic subject matter was limited, so finally the garden birds would get their day in the sun.

Of all the feathered visitors to my garden the most intriguing are the rose ringed parakeets. Usually found on the Indian subcontinent, these birds are now found in major cities around the world. The most likely reason for their now status as a native UK bird is that a few escaped from an aviary in the early 1970’s, or that they were released by Jimi Hendrix, it really all depends on which urban legend you believe. Regardless, these exotic birds are now found in the trees in my garden thanks to the bird feeder my neighbour regularly tops up.

You would think that 600mm would be enough to photograph birds in a small London garden, but even for the slightly larger parakeets, I still could have done with a little but more reach. Setting the A7 III to its APS-C crop mode transformed the field of view so that it was the equivalent of a mighty 900mm lens, but this did have a big dent on the resolution. Instead of 24million-pixel images, I was shooting at 10-million-pixels, however, as someone who likes to get the image as close to the final result in-camera as possible, I preferred this to cropping when editing.

I did manage to use the lens handheld, although I wouldn’t recommend it. It is a fairly heavy lens to be wielding around, and with such a long focal length any slight bit of camera shake is magnified. Of course, the in-camera and lens stabilisation made a noticeable difference, I still felt much more comfortable using a monopod and increasing the shutter speed to around 1/1000th sec, even when the birds were perched. I’m more used to a wide-angle lens and a solid monopod, so I really was learning on the job when it came to photographing these birds. If birds are speciality I have no doubt you’ll have some advice on this and will be even better at handholding, but for this guy just dipping his toes I was erring on the side of caution. 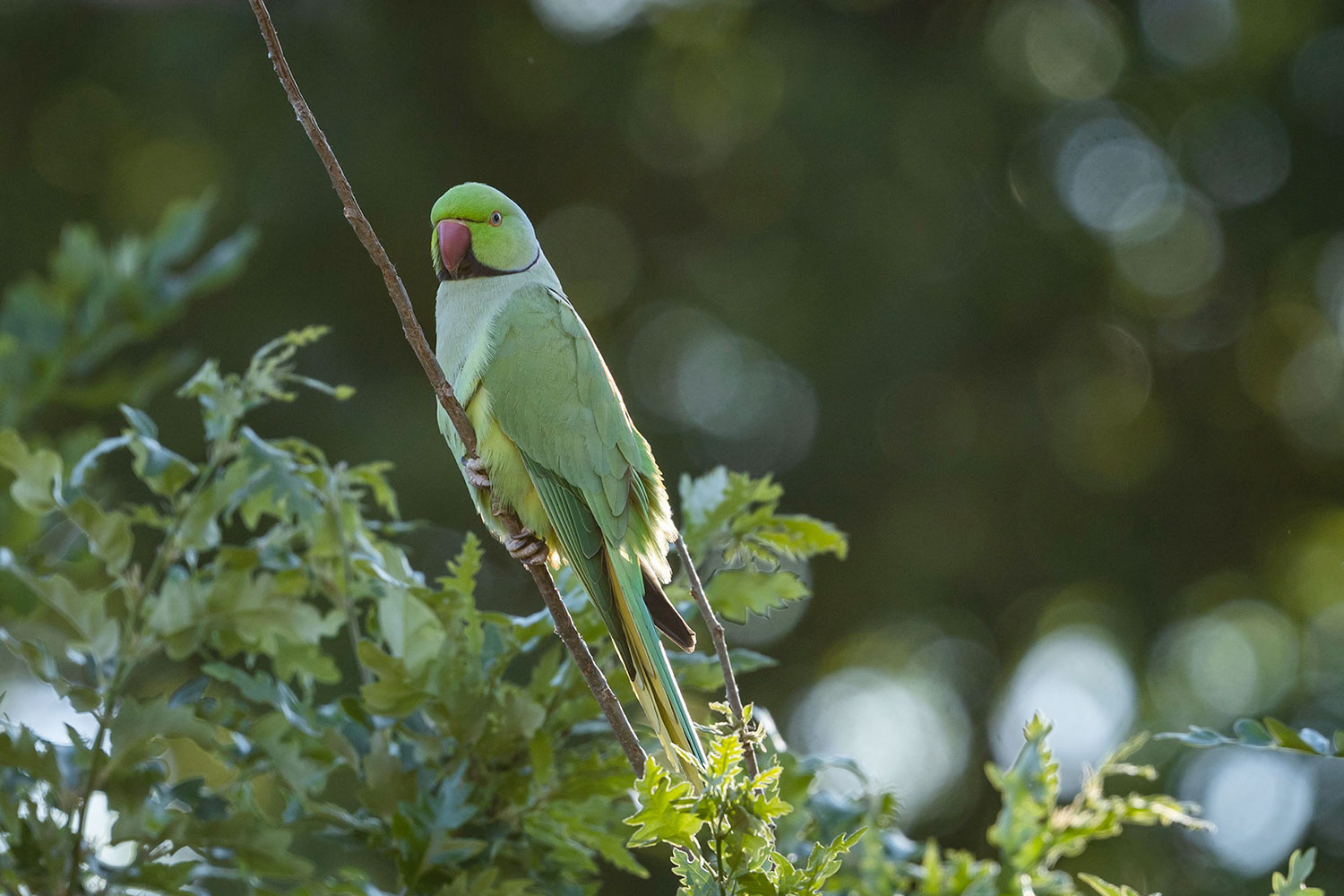 OK, field craft is a bit of stretch given we’re in a back garden, but I did start to make a mental note of what the parakeets were up to. There were certain times of day when one or two would stop and stay for a while, presumably doing the rounds of the local hangout spots seeing what food was abundant that day and where.

What I also noticed was that they liked certain branches in the tree. There were particular perches they would land on and then sit and wait to dive down to the bird feeder. The branches they landed on were stripped of leaves, presumably where the birds claws had scratched away at the growing buds. I made a particular point of watching these branches from the house, ready to dart outside should a bird land, but as with everything, getting images in the right light was the key.

Shooting facing west the parakeets would be lit up fully first thing in the morning, whilst late in the evening there would be the chance to get some backlit images. In the middle of the day the light was very hard in the sunlight, so I generally avoided shooting at this time. Perhaps contrary to what most people think, shooting in low contrast conditions worked very well, it enabled me to really bring out the colour of the birds. 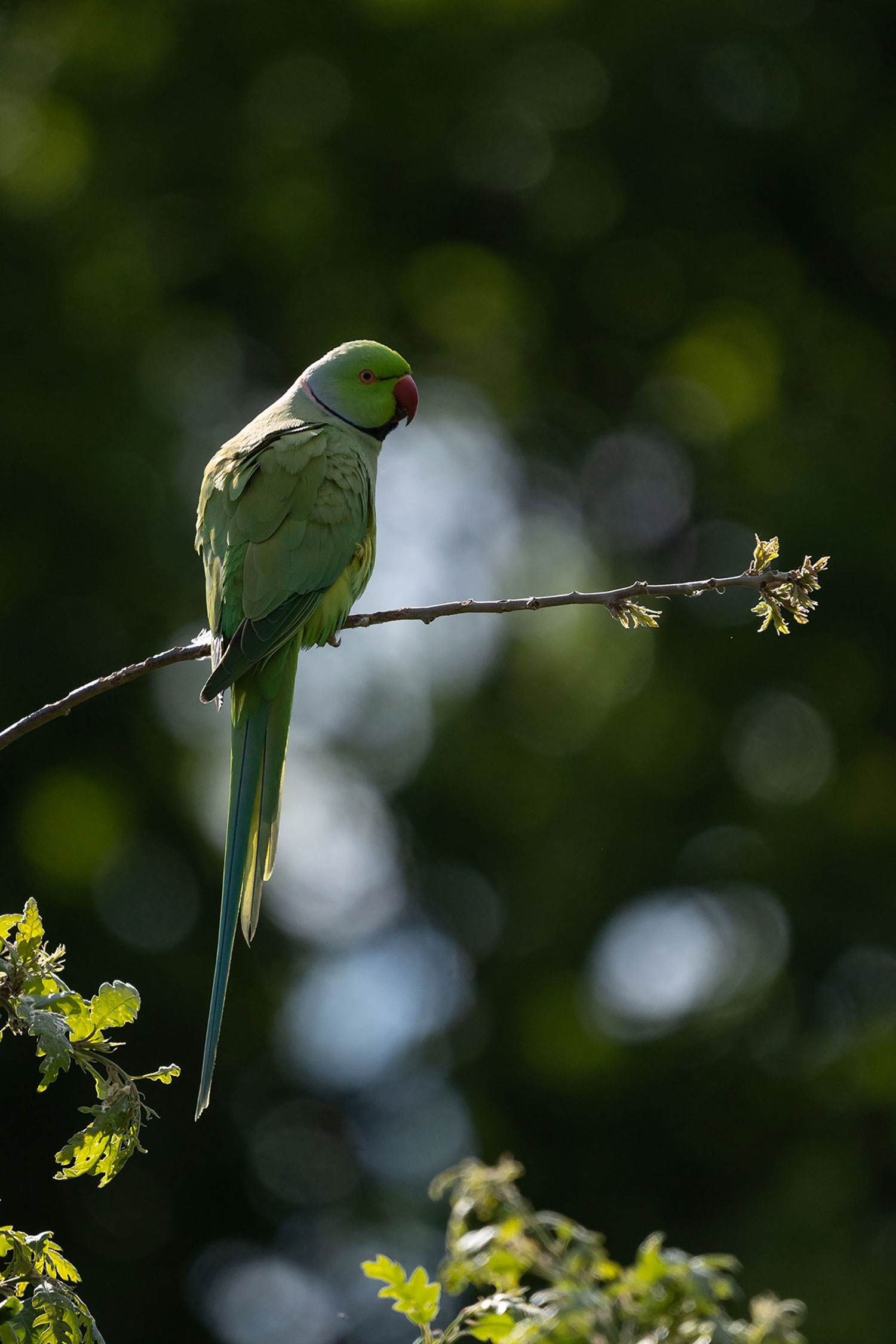 Just like when shooting a portrait or documentary image, I quickly realised that the background would make a difference between a good shot and an average one. When using a telephoto lens, even shifting a my feet a metre or two and changing the height and angle fo the lens could make a big difference in what was behind the bird I was photographing. With this in mind, I started to look at the perches through the lens without the birds even in shot. I would move around and find the perfect backgrounds - it’s actually a great tip for shooting portraits on location too.

From just a few days I managed to learn a lot from my experiences. Firstly, the kit. Even with a 600mm focal length I still needed a touch more reach to get what I wanted. Using an a7R IV would have been one solution, with the camera’s 61-million-pixel resolution allowing for 26-million-pixel images in its APS-C crop mode – the equivalent of a 900mm lens. Although, lets be very honest here, with most of us just showing images on social media, or printing to around A4 in size, the 10-million-pixel crop mode of the A7 III will be more than enough for most photographers. 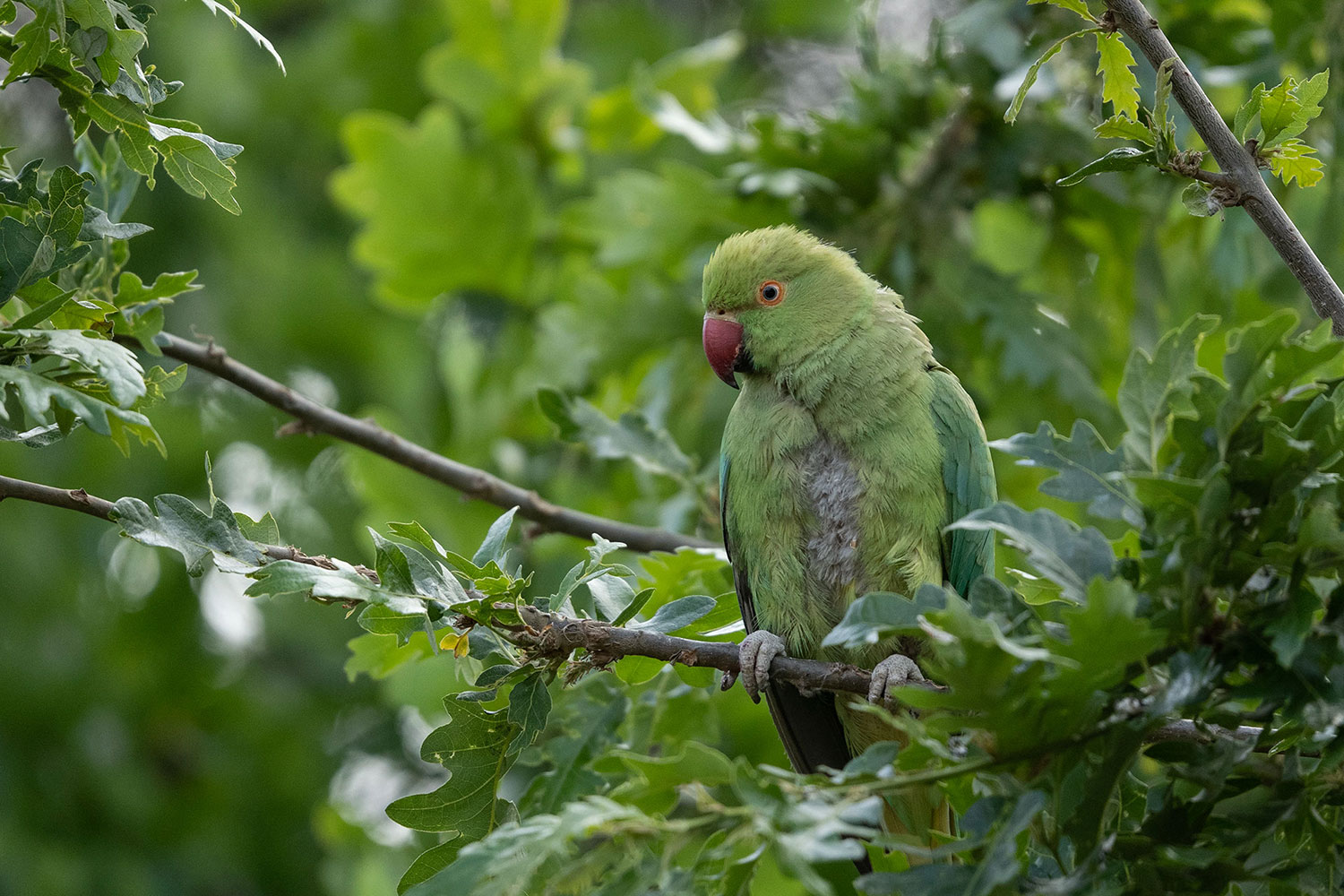 The lens itself is great. It’s an affordable telephoto option for Sony users, and if it is still a bit out of your price range, you can always hire one for a particular project or weekend away. The autofocus didn’t seem quite as snappy as the FE 400mm f/2.8 GM lens, but it certainly didn’t stop me getting the images I wanted, and I would be happy to take it away on safari with me.

I’ve also developed a new found love of the garden birds, and I’m already on a new photo project photographing the reflections of the robins that have been nesting in my shed. I’ve built a reflection pool and set up some wireless triggers so I can happily sit with the wireless remote in hand, a cup of coffee in the other, waiting for the robins to land and find the meal worms I’ve hidden for them. 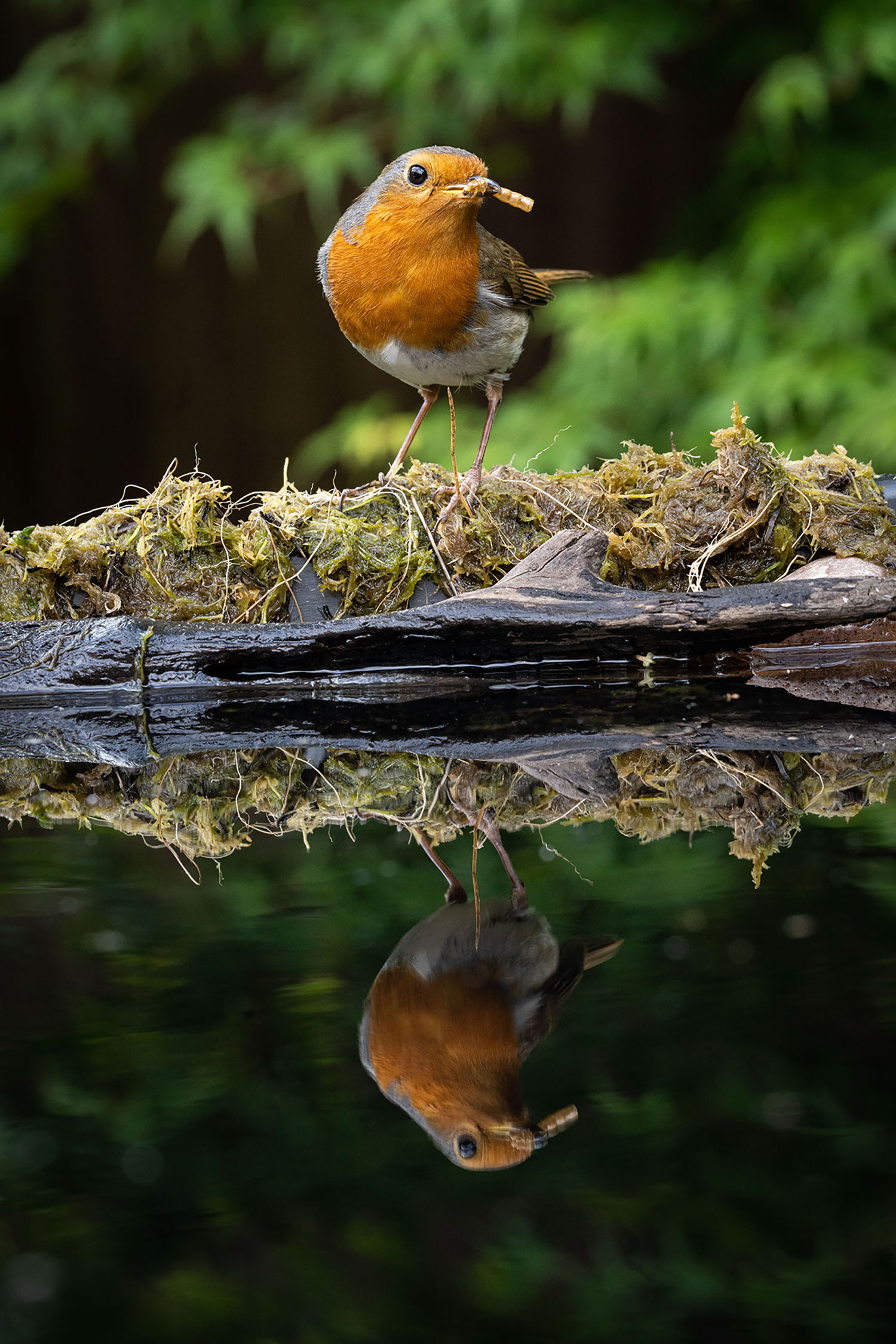 • Study your subject. Spend some time just watching and observing garden birds. They are creatures of habit and will have particular perches, flight paths and times of day when they will be most active. If you are busy, then you can always listen out for their calls and keep a note of when they are about.

• Light and background is key. Think about how to make the bird stand out from the background. This could be from backlighting it, finding an angle that produces a light or dark background, or finding a spot where speckled light hits the bird. You don’t have to blur the background, but try and keep it from detracting from the subject.

You can find more of Richard's brilliant photography over on Instagram: @richsibley.