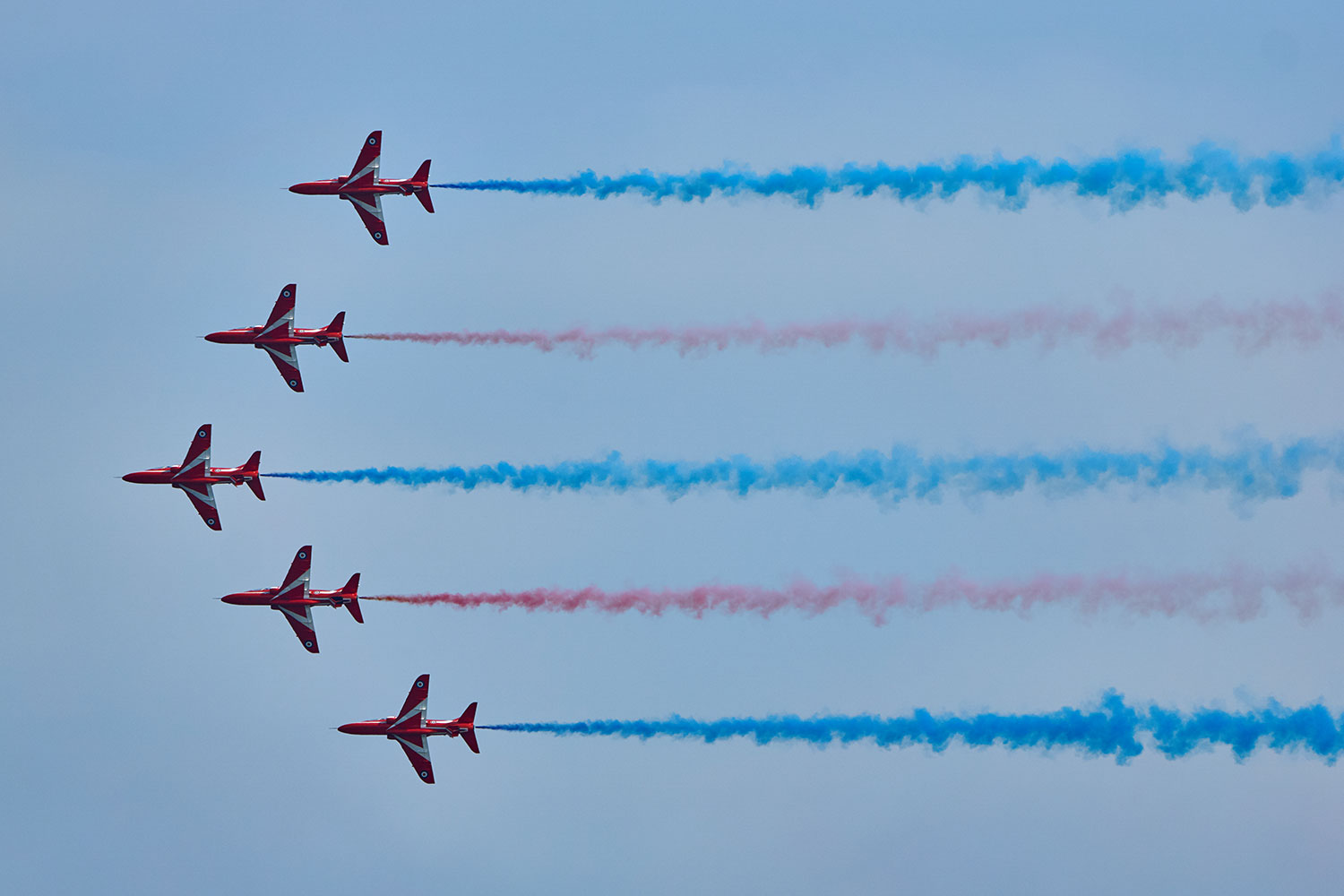 Robin Walker classes himself as an enthusiast photographer as, he states, he is still learning. He enjoys exploring post processing techniques and finds that he is keen on keeping images looking as natural as possible. His favourite topics of photography are steam trains, motorsport – particularly the British Touring Cars and occasionally he turns his hand to his local landscapes, in and around Plymouth.

He chose to hire the always popular Sony FE 100-400mm F4.5-5.6 GM OSS, having attempted to photograph a Eurofighter Typhoon FGR4 a few years ago, with a compact camera, and not having much luck.

Robin has been kind enough to give an extremely detailed case study, so we’ll let him explain the rest!

I live in Plymouth, a city steeped in military history, and one of three operating bases in the UK for the Royal Navy. There are also other Armed Forces units based in and around the city and surrounding areas. Since 2010 one annual event in the city's calendar is Armed Forces Day, which takes place on Plymouth Hoe with Plymouth Sound bay as a backdrop. This provides a huge natural open-air amphitheatre and offers panoramic views of any sailing events, competitions and / or air displays.

The programme and displays at Armed Forces Day has varied from year to year, and luckily the air display this time was being headlined by the Red Arrows, the last time they performed in the city was back in 2012. I generally don't photograph aircraft, although back in 2015 a Eurofighter Typhoon FGR4 formed part of the Armed Forces Day air display and I did attempt to capture some pictures on my Panasonic Lumix TZ25 compact camera. However, as this plane is incredibly fast and manoeuvrable, and the nature of the display was so unpredictable, I found it very challenging and incredibly difficult to pan the camera and capture a perfectly sharp image of the entire aircraft. 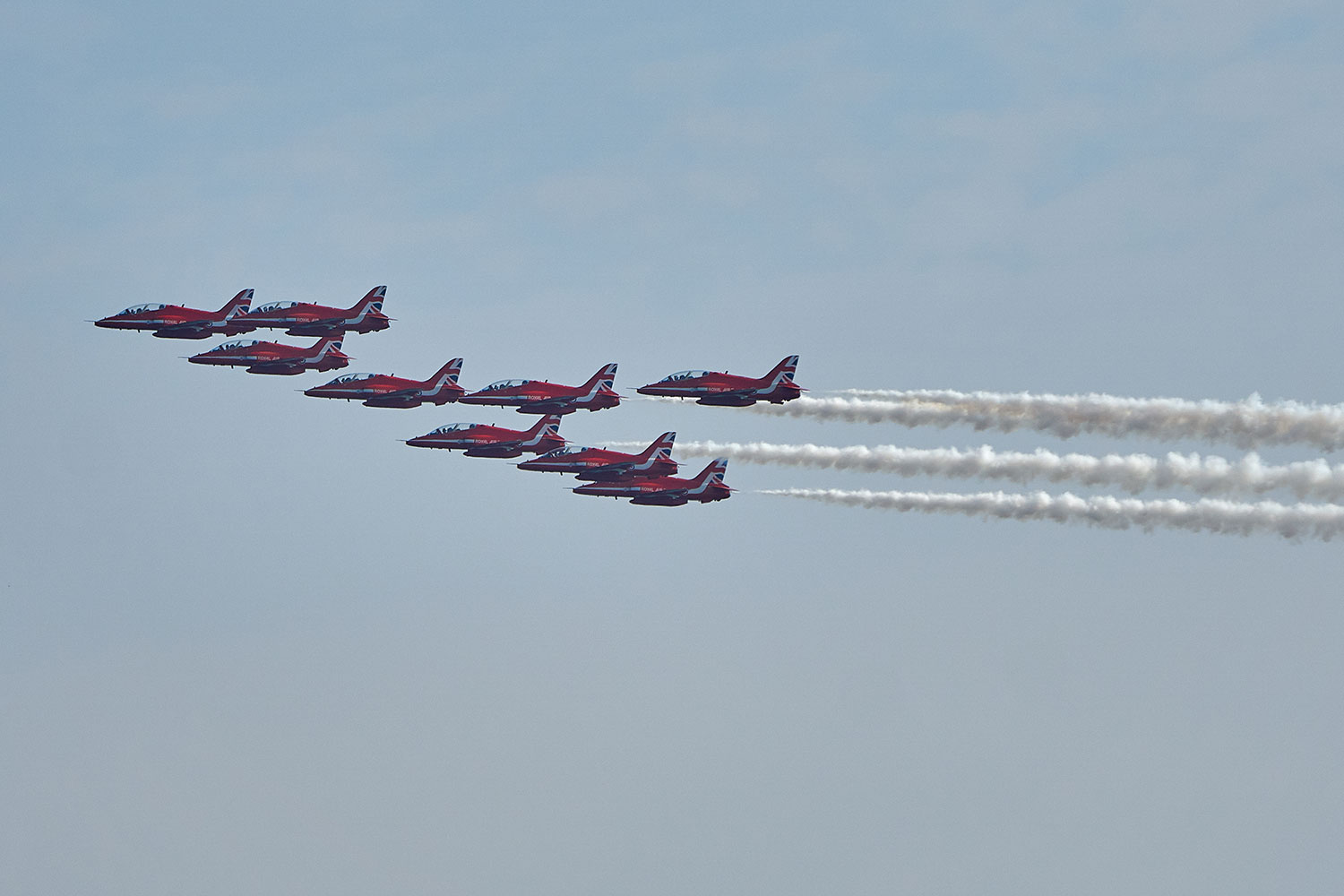 Back in 2015 I decided to replace my Panasonic Lumix with a Sony a6000, a mirrorless camera with an APS-C sensor, and this is now the main camera that I use for most everyday situations. As the opportunity to photograph the Red Arrows performing a display over Plymouth Sound had presented itself, I thought I would take up the opportunity to go and try to capture some images of the display. In comparison to the Eurofighter Typhoon’s top speed of Mach 1.8 (1,380 miles per hour), the Hawk aircraft used by the Red Arrows have a maximum speed of 645mph, and as I was able to research the whole display on the website, I could anticipate the aerobatic manoeuvres that they would be performing which I hoped would make them much easier to photograph. As I only currently own the Sony 18-200mm zoom lens, I thought the best option would be to hire the Sony FE 100-400mm F4.5-5.6 GM OSS lens, especially as the x1.5 crop factor of my own camera would then give me an effective focal length of 150-600mm. I did book this several weeks in advance of the event to ensure I obtained the lens that I wanted, but this meant that I had to take the chance that the weather would be good on the day and the sky would not be too cloudy. 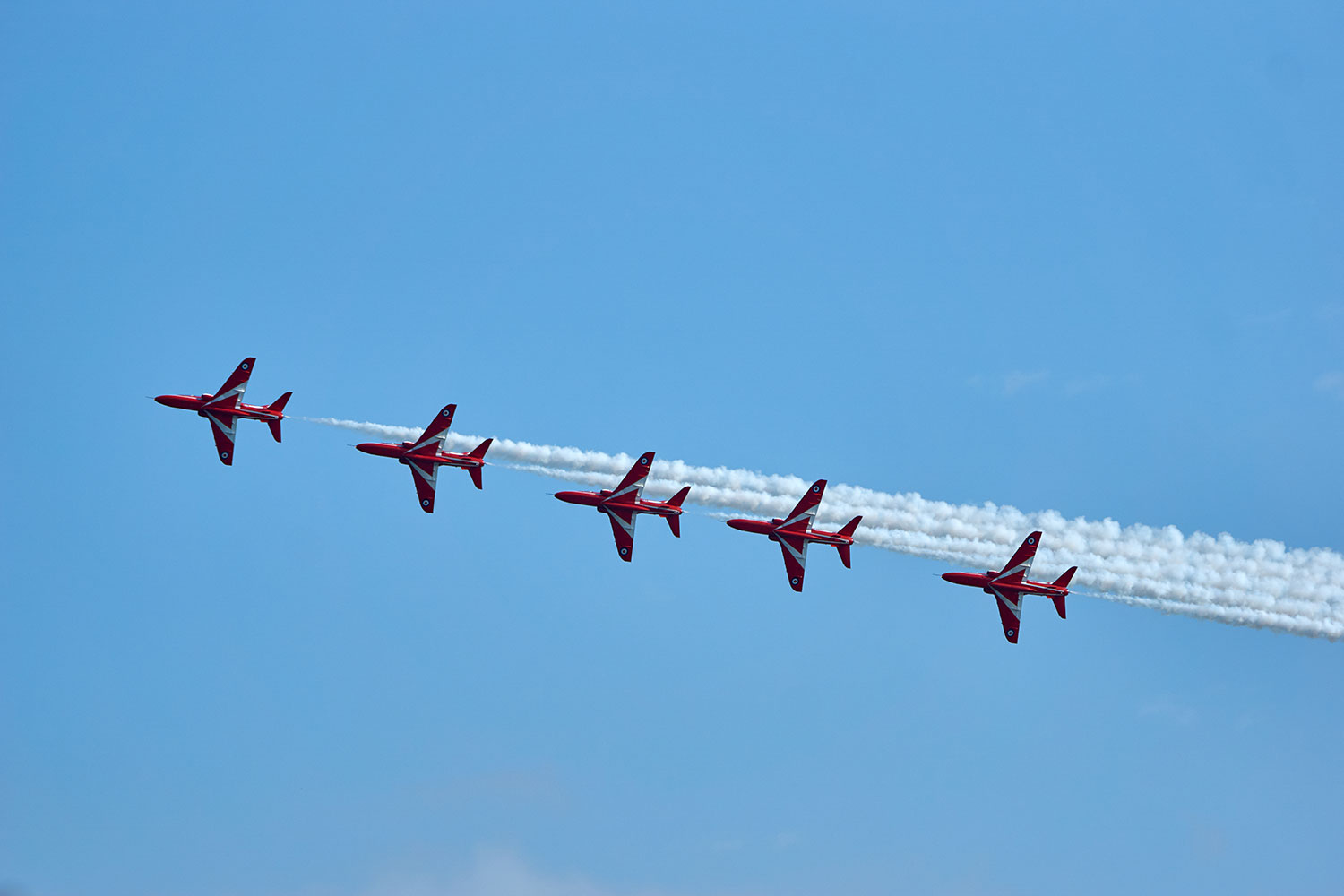 The main reason I use Hireacamera is that it gives me the flexibility to hire the latest and best lens/lenses for the subject I want to photograph at a relatively modest price – especially when you compare what it would cost to buy each of the lenses. The Sony FE 100-400mm F4.5-5.6 GM OSS lens for instance retails at around £2,500, so in contrast, hiring it for £64.20 plus delivery for a whole weekend is a quite reasonable. As the equipment generally arrives the day before the hire starts it also gives you chance to put it through its paces and set it up to get the best out of it before you use it for real or consider buying it at some future time. What I would also like to add is that I have been very pleased with the service I have received from Hireacamera on this and the previous occasions I have used them. 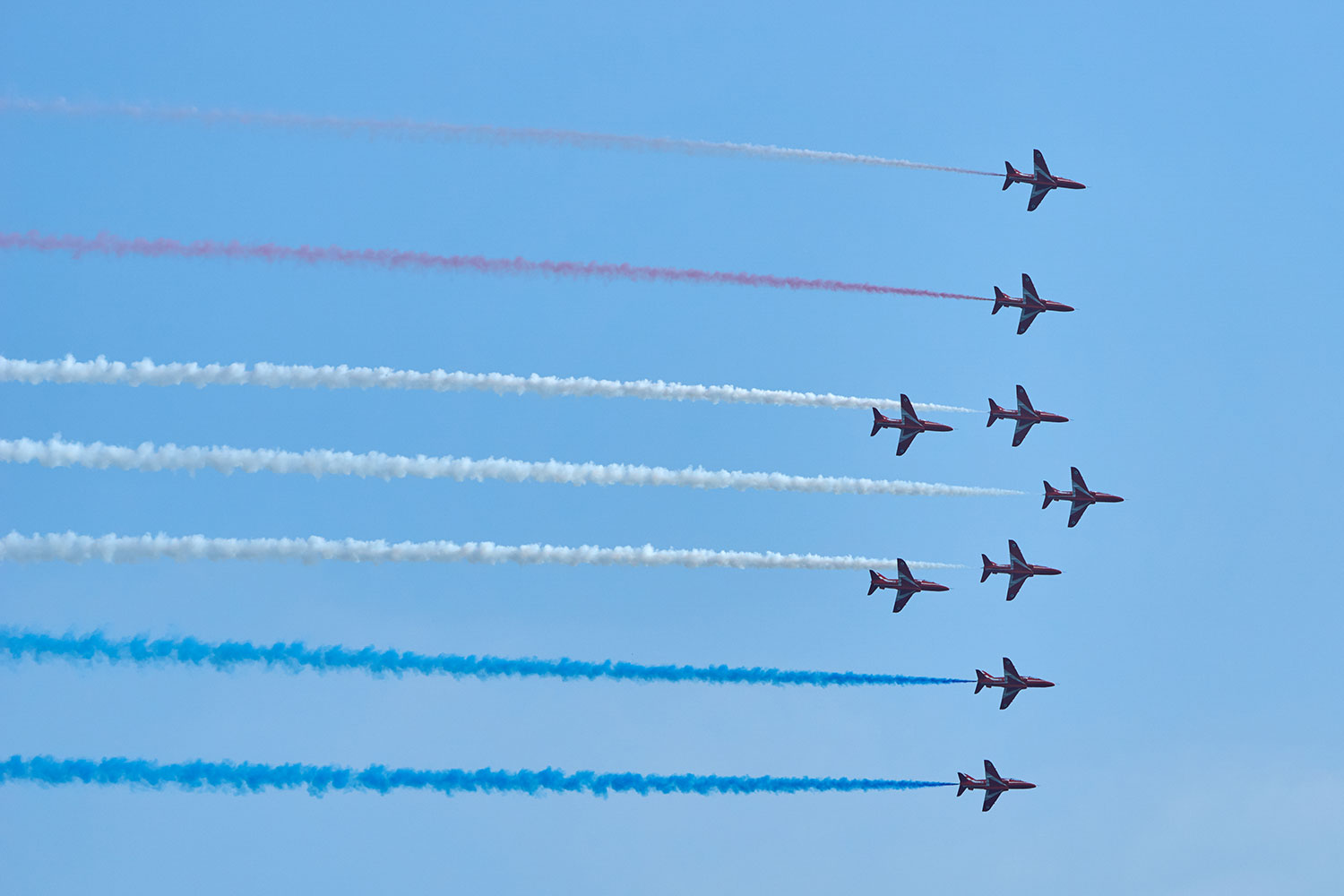 Having not used this particular lens before, I was quite surprised by how reasonably lightweight it was for its size, although once attached to my Sony a6000 it did look very large. Luckily in the afternoon the weather was good with a blue sky and minimal cloud, so I was pleased that my efforts were not in vain. I am not an expert at photographing aircraft or air shows, but the favourable conditions allowed me to set up my Sony a6000 in shutter priority mode at 1/2500 sec, with ISO 160, continuous shooting (high) and continuous auto focus. I hoped that this would give me the best chance of having more 'keepers' at the end of the day. I shot hand-held and I tried to use a good panning technique following the aircraft across Plymouth Sound, taking a burst of images as they performed various shapes or formations. On the whole the lens produced some crisp images, but the A6000 did struggle to focus on maximum zoom (400mm) when the aircraft were further away or flying close by to the sun. 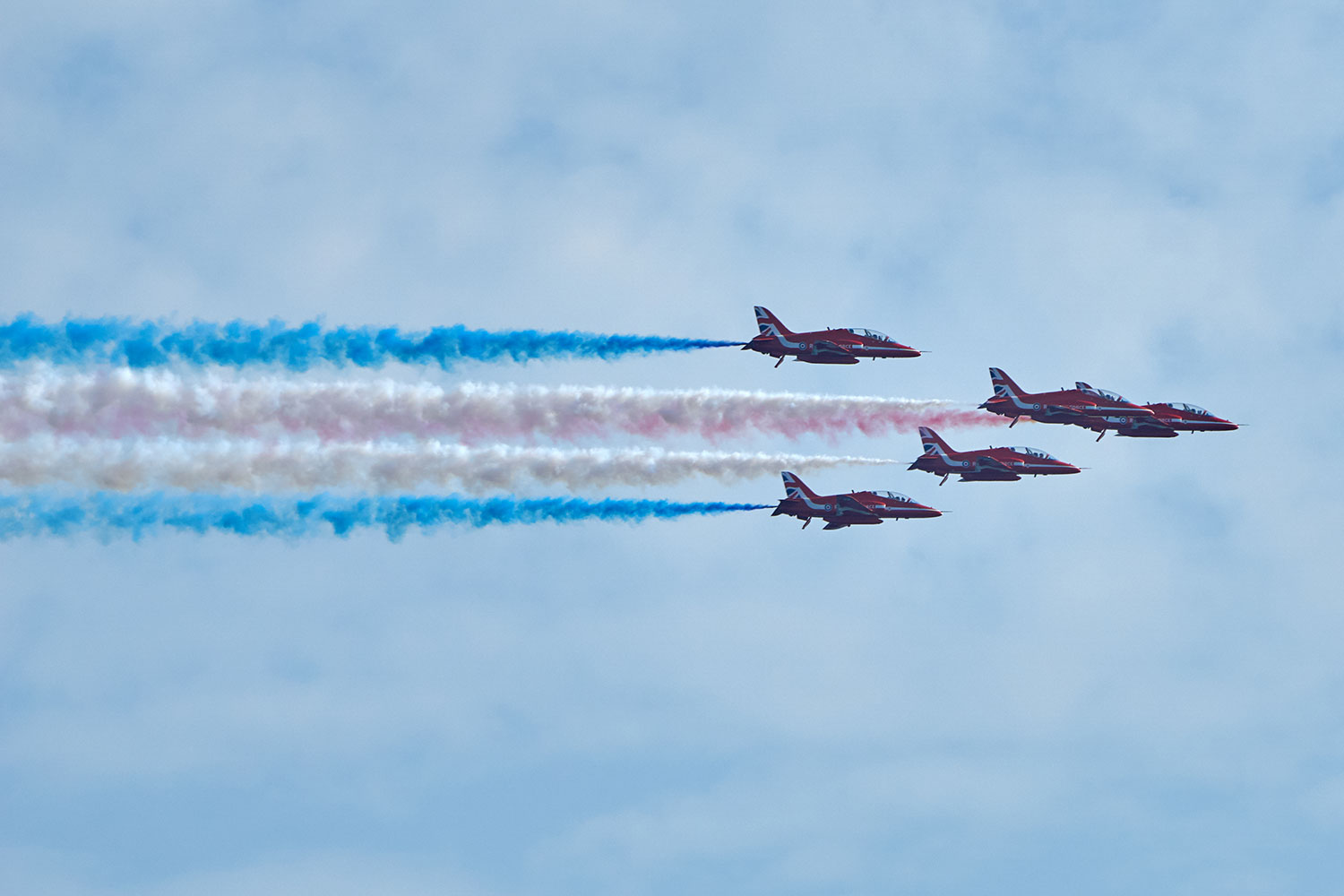 In these circumstances, the camera would not lock onto the moving aircraft and instead it kept trying to lock focus onto the sky; I believe this was an issue with the a6000, rather than the lens. I did initially try switching the auto focus between spot, centre weighted and wide area but this had limited success. I quickly found the best technique to overcome the problem was to zoom out, recompose the shot onto a stationary object, then look for the aircraft again through the viewfinder, hold the shutter release half way down so that the camera then locked onto them, quickly zoom back in and start shooting. This was a little bit cumbersome, time consuming and frustrating but the quality of the images it produced was more consistent and worth the hassle. 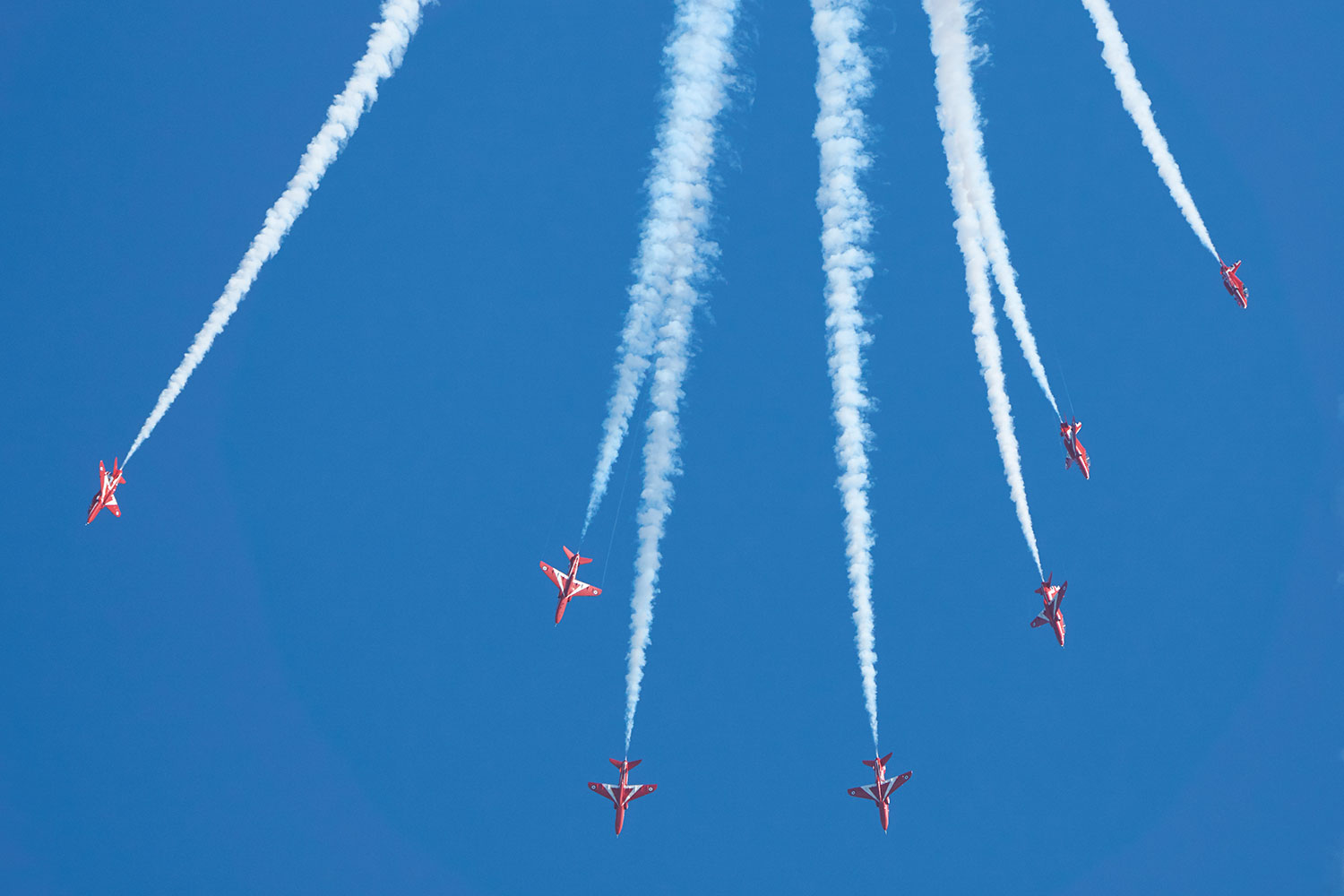 Personally, I prefer my images to be as true to life as possible, with the colours as natural as I can get them. I am not a fan of over saturated, over exposed or highly stylized pictures. The raw images taken on the day have been processed with Capture One for Sony, the main corrections being rescuing detail in the highlights, reducing the contrast slightly and using a subtle sharpening preset. 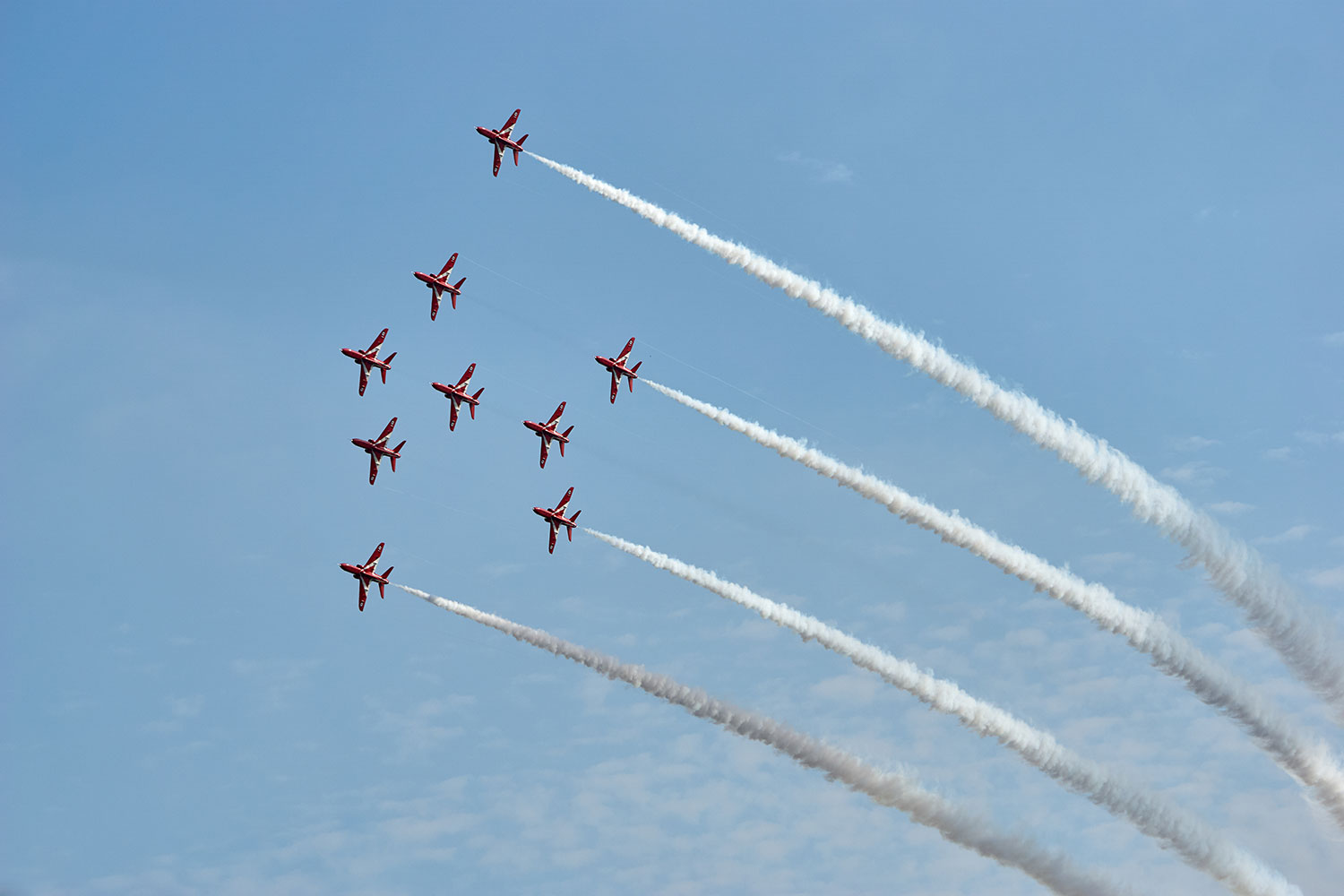 Well we can all agree that Robin has achieved some truly brilliant results with the Sony FE 100-400mm F4.5-5.6 GM OSS! Many thanks to Robin for taking part in the case study and for his lovely feedback.

Fancy trying your hand at aviation photography? Eastbourne’s international airshow ‘Airbourne’ takes place from the 15th to the 18th of August and is the perfect opportunity to test your skills! The Breitling Jet Team will be performing, plus you will see The RAF Typhoon, The Blades, wingwalkers and the Battle of Britain Memorial Flight.

As always, if you have some images or video you’re particularly proud of, having hired our equipment then please do share it with us via enquiries@hireacamera.com, or tag us on Instagram, Twitter or Facebook; we can’t promise to publish everything we receive but we love to see your work, nonetheless!