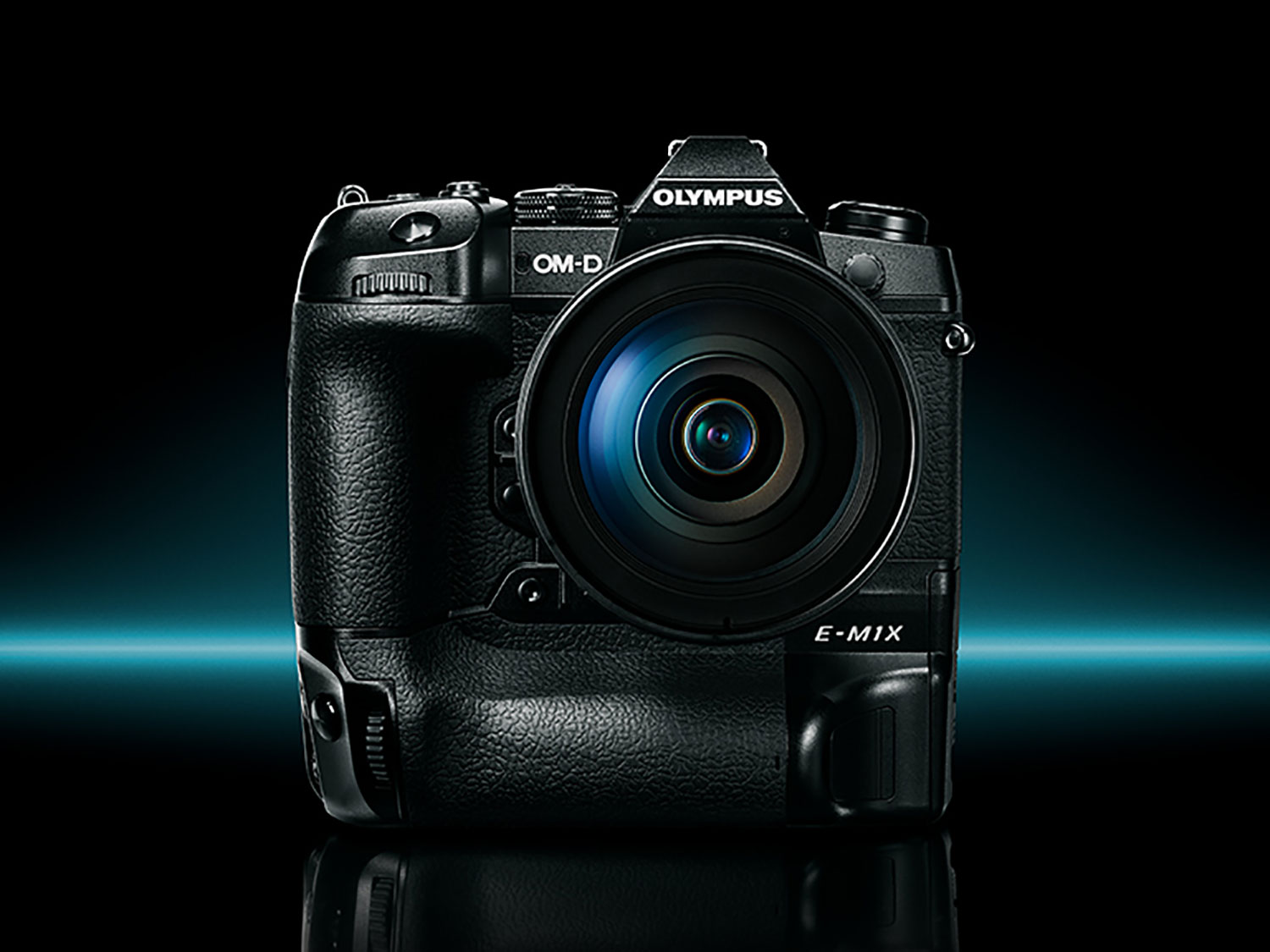 Hamburg, 24. January 2019 – Olympus today introduces their new OM-D E-M1X camera: designed to meet the needs of professional users in terms of reliability, speed, precision and image quality, the E-M1X still remains true to Olympus’ promise to offer the most compact and lightweight camera system in its class.

Olympus’ newest addition to the professional OM-D line-up underlines the potential of the Micro Four Thirds sensor format and is packed with the latest imaging technologies in a robust casing with integrated vertical grip developed for maximum reliability and operability under all conditions. Featuring the world’s best image stabilization (IS) performance, a re-developed and fast autofocus (AF) system, as well as two TruePic VIII image processors allowing for high-speed responsiveness and handheld High Res Shots, this powerhouse camera offers a compelling mix of impressive features and portability. In combination with Olympus’ high-resolution M.Zuiko lens line-up, it achieves high-end image quality and shows its true abilities especially in fields where portability, speed and reliability are absolutely essential – such as wildlife, documentary and sports photography.
Two years after laying down a marker in the professional camera category with the OM-D E-M1 Mark II, new M.Zuiko PRO lenses and the launch of the Olympus PRO service, the new E-M1X will now be added to Olympus’ offering for professional users.

With its integrated vertical grip, the world’s best dust-, splash- and freezeproof body and numerous new features demanded by professional photographers, the E-M1X offers unprecedented control, ergonomics and stability whilst delivering professional results under all weather conditions. With a new gyro sensor, Olympus has taken their acclaimed 5-axis sync IS to a new level offering up to 7.5 shutter speed steps of compensation.
The OM-D AF system has been completely redeveloped, offering additional focal points and a new intelligent subject detection function to automatically track certain subjects. The high-speed shooting capabilities have been enhanced and anti-flicker shooting has been added. Further improvements include a handheld High Res Shot, a live ND filter functionality as well as a customizable menu, USB powering & charging capabilities and two UHS II SD card slots. In combination with high-quality M.Zuiko lenses, a new wireless flash and the image management software “Olympus Workspace”, the E-M1X is the perfect tool to capture professional results and work with them.

A new benchmark in durability, reliability and operability

With an integrated vertical grip, the E-M1X delivers that extra in secure holding and reliability many professionals were looking for. As the design is the same on both the vertical and horizontal grip, users enjoy the same intuitive hand movements in portrait and landscape format shooting. 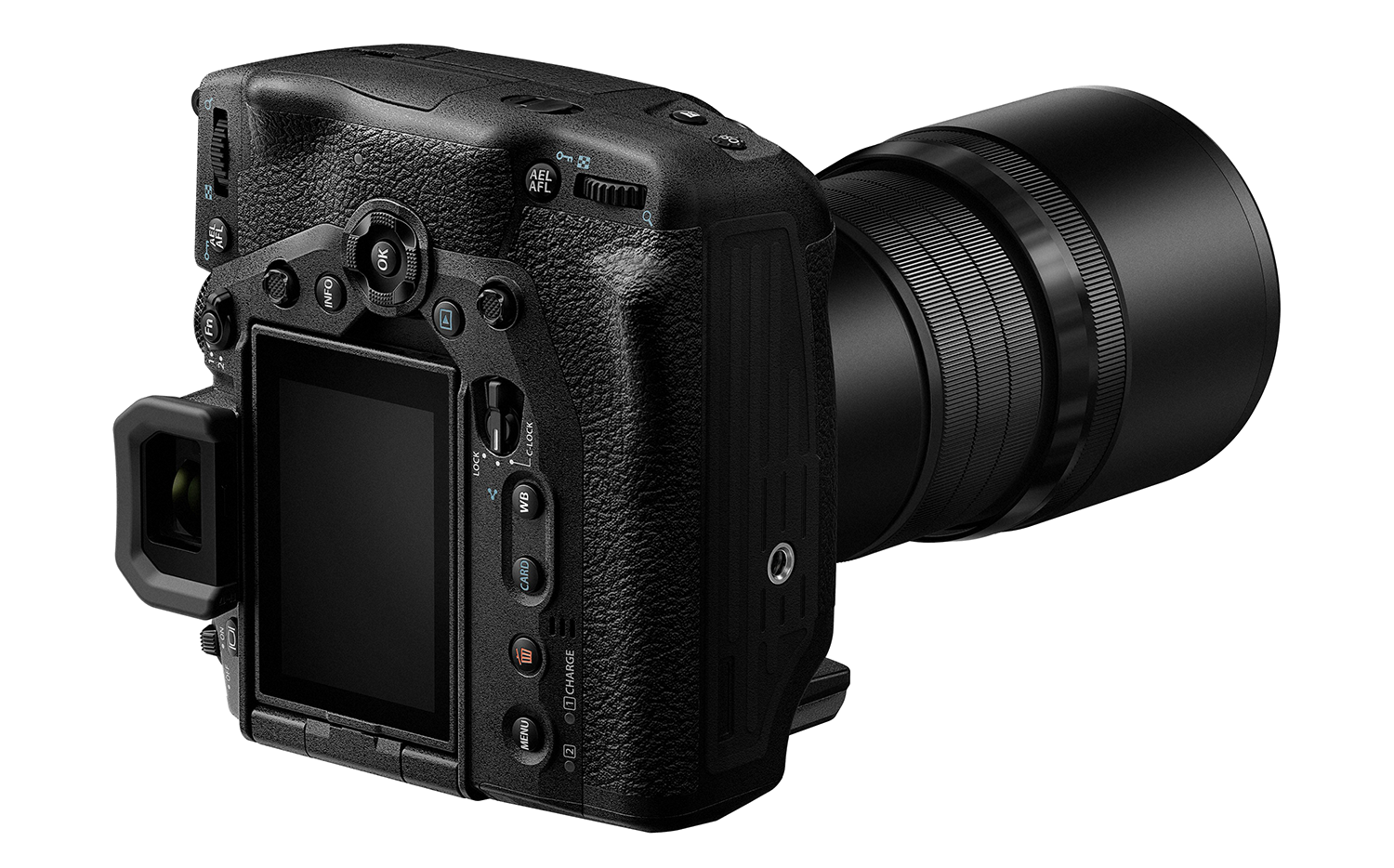 The layout, shape, and height of all buttons and levers were completely redesigned to deliver controls enabling users to concentrate on shooting with the viewfinder – which features a new optical design with the industry’s top-class magnification of 0.83x (35mm equivalent). A multi selector joystick is included in both the horizontal and vertical positions so that users can quickly shift focus areas. In addition to the standard lock lever, a new C-lock lever allows for locking the controls in the vertical position and locking selected controls only. 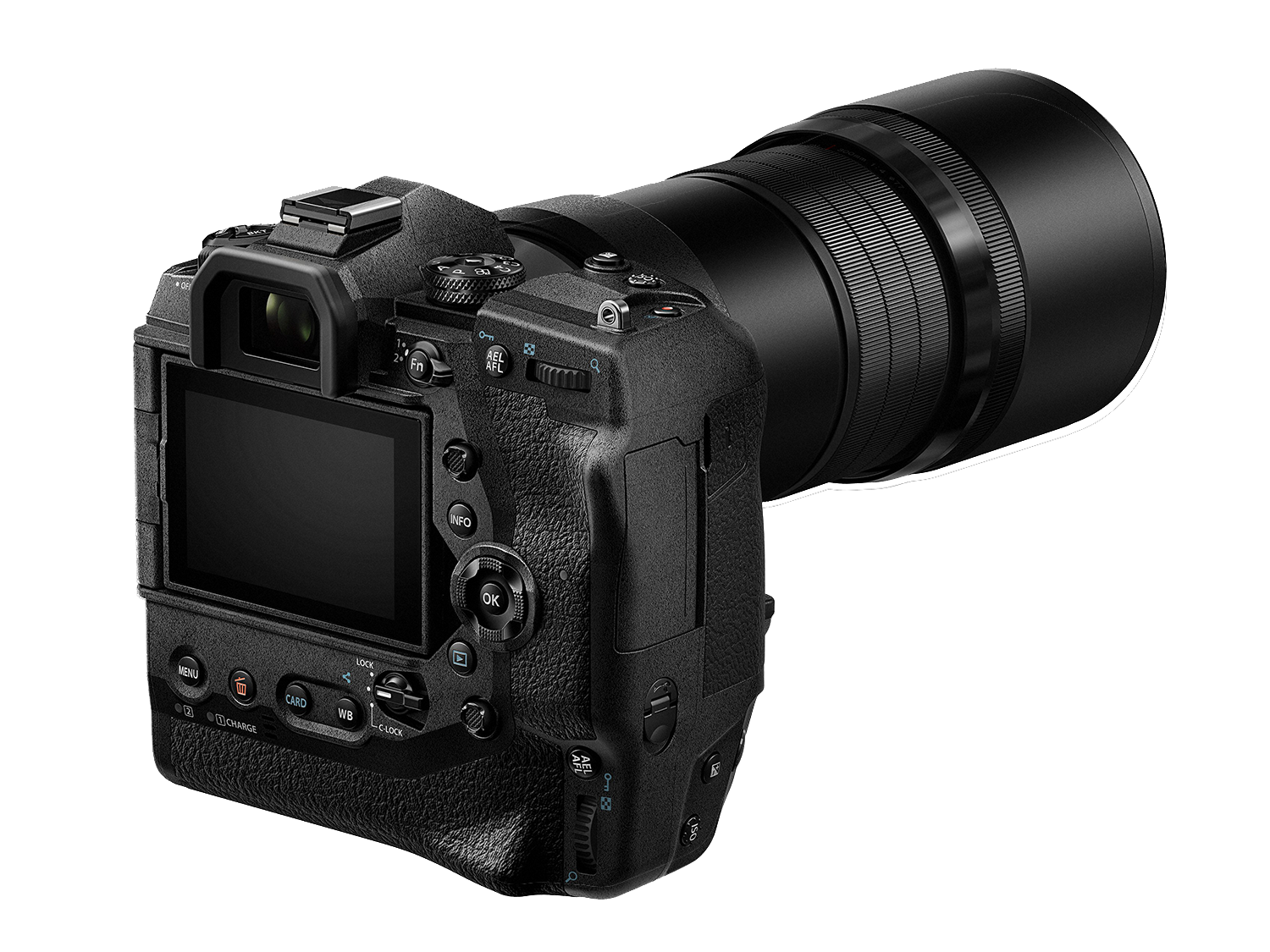 Thanks to renowned OM-D weather sealing – which has been taken to a new level in the E-M1X and makes it the world’s best – the camera has cleared Olympus’ in-house splashproof tests that are more rigorous than IPX1, allowing users to shoot in the most severe weather conditions. Dust-, splash-, and freezeproof performance is maintained even when connecting a remote cable, microphone, or headphones.

The sensor dust reduction system now features an improved Super Sonic Wave Filter (SSWF) with special coating which vibrates 30,000 times per second further reducing the possibility of dust or dirt ruining photos and equipment by factor 10. Further features enhancing the camera’s durability and reliability include a construction that dissipates heat when shooting movies and during sequential shooting and a top-class shutter operation life of 400,000 times.

Due to a cartridge insertion system for two BLH-1 batteries (also used for the E-M1 Mark II) in the E-M1X, users can capture up to 2,580 images before having to recharge. Featuring USB Power Delivery (USB-PD) from up to 100 W power sources, both batteries in the camera body can be fully charged in approximately two hours.

The OM-D AF system has been completely re-developed for the E-M1X: building on the 121-point all-cross-type on-chip Phase Detection AF sensor from the OM-D E-M1 Mark II, the AF algorithm has been re-worked and was dramatically improved. The E-M1X furthermore utilizes AF information from recorded images to enable quick tracking of unpredictable subject movements and changes in subject speed.

A new intelligent subject detection feature allows the AF system to automatically detect specific subjects (motorsports, airplanes, trains), focusing and tracking the optimal area, so that users can fully concentrate on the composition.
With an AF low intensity limit of down to -6 EV steps the E-M1X also takes the worry out of shooting in low light. 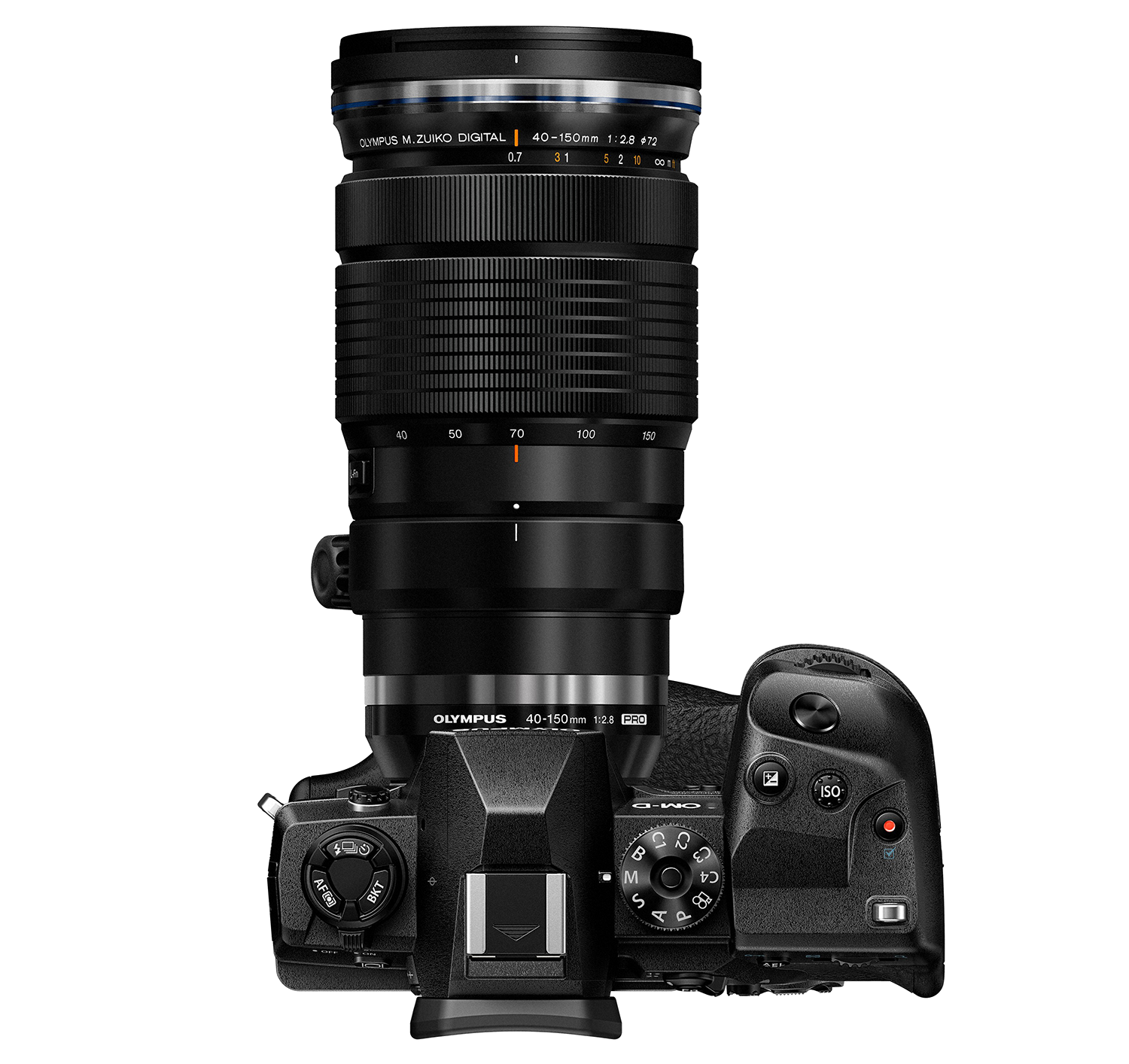 Speed and image quality of the new E-M1X are fuelled by a 20.4 MP Live MOS sensor with a new coating in order to deliver improved sensitivity as well as two TruPicVIII high-speed image processors improving fundamental performance factors such as start-up time and recovery time from sleep mode. The dual processor design not only contributes to a faster camera, but also allows the support of two high-speed UHS-II SD card slots and enables the latest shooting functions such as Handheld High Res Shot, Live ND, and Intelligent Subject Detection AF.

With the E-M1X, Olympus engineers have taken image stabilization yet another step forward: by introducing a redeveloped gyro sensor, the camera allows for the world’s best compensation performance. In combination with a M.Zuiko IS PRO lens, this technology enables the 5-axis sync IS to compensate for approx. 7.5 shutter speed steps, eliminating the need for a tripod and enabling free-hand shooting in various conditions.

With locked AF, the E-M1X features high-speed sequential shooting at a maximum of 60 fps to capture split-second moments that the human eye cannot see. With AF/AE tracking, a maximum of 18 fps may be reached.
The camera’s Pro Capture Mode records up to 35 frames retroactively from when the shutter button is released during shooting. This feature already received praise when being introduced on the OM-D E-M1 Mark II, and is ideal for action photography to capture shots of subjects that move unpredictably.

In addition to high-resolution maximum 80 MP images that can be captured in Tripod High Res Shot, a Handheld High Res Shot functionality is now available on the OM-D E-M1X: designed for photographers who don’t want to be limited by using a tripod, this function generates a single high- resolution shot equal to that captured with a 50 MP sensor – without any signs of blur caused by handshake.

A new Live ND functionality incorporates slow shutter speed effects as though using an ND filter. The scene can be reviewed in the viewfinder and the effect edited before users take the photo. Effects can be set in five levels: ND2 (equivalent to one shutter speed step), ND4 (2 steps), ND8 (3 steps), ND16 (4 steps), and ND32 (5 steps). 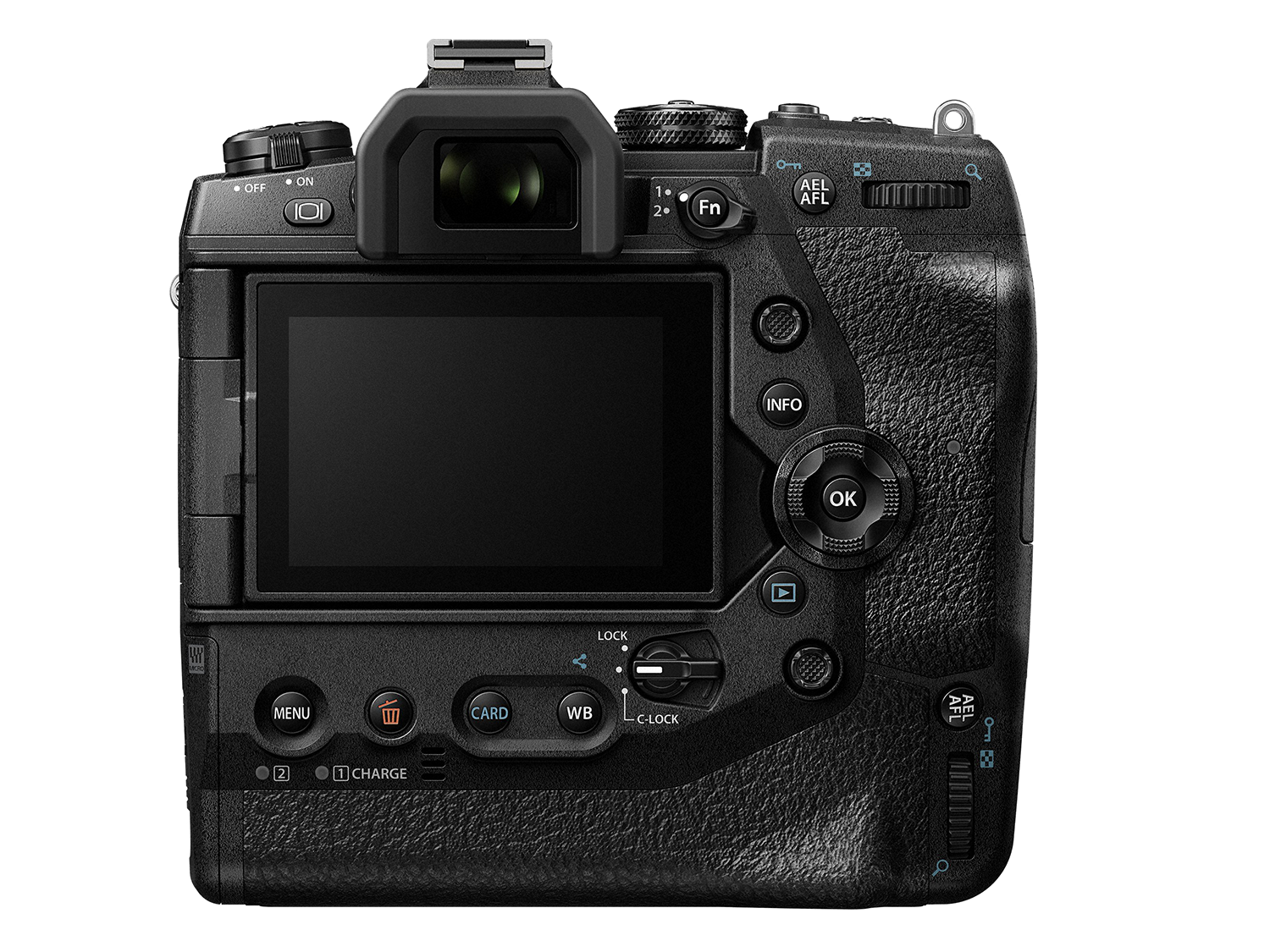 Movie capabilities and other features

In addition to professional-quality photos, the new E-M1X is a master at movie-making. It features all the extras videographers need to capture moments as they happen. With the ultra-high Cinema 4K (C4K, 4096 x 2160) movie format, videographers not only have the highest recording resolution to date, but also more flexibility when it comes to postproduction.

The powerful 5-axis IS and electronic stabilization enable refined handheld 4K and C4K video recording with three selectable levels of movement compensation depending on the photographer’s posture and movement. To counteract changing lighting conditions typical during documentary and nature shooting, the E-M1X supports log shooting. OM-Log400 delivers movies without loss of details in shadows or highlight blowouts, and greater freedom over video creativity through colour grading. Moreover, 120 fps high-speed movies are now supported in Full HD resulting in the capability to shoot cinematic movies with slow-motion perception.

The OM-D E-M1X contains a built-in GPS sensor, temperature sensor, manometer and compass, collectively known as ‘field sensors’. In addition to location information such as longitude and latitude, these sensors detect and record the temperature, elevation, and direction of the camera for adding detailed shooting information to images.

With an anti-flicker shooting feature, the camera detects the flicker frequency of artificial light sources and activates the shutter at peak brightness to minimize uneven exposures and colouring between sequential frames. Flicker scan suppresses striped patterns that can occur when using Silent Mode (electronic shutter) and when shooting movies, so that users can fine tune the shutter speed.

A new Wi-Fi capture allows tethered shooting without a cable and makes it possible to transfer images wirelessly to a computer with the “Olympus Capture” camera control software.

The OM-D E-M1X is compatible with Olympus’ range of professional-grade Micro Four Thirds lenses and accessories, including tailor-made camera bags, electronic flashes and flash accessories. A new image management software as well as a new electronic flash and wireless commanders will be launched.

This image management software delivers authentic image viewing and editing functions featuring various workflows for professional photographers. Olympus Workspace can be downloaded free of charge for users who own an Olympus camera. 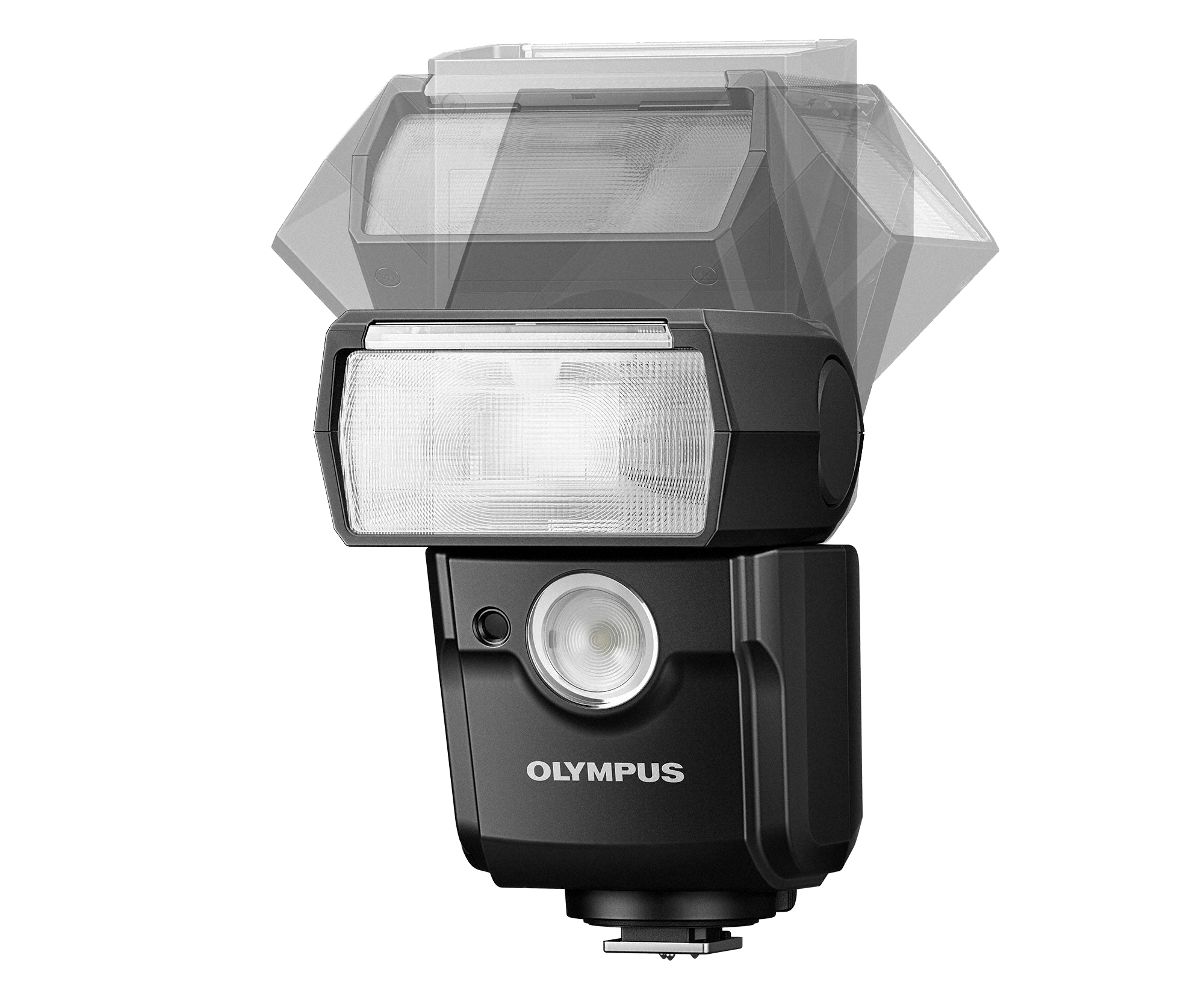 The FL-700WR is a high-performance electronic flash compatible with wireless radio wave shooting. During wireless shooting, it can be used as a commander or flash with built-in receiver. The compact, lightweight design delivers excellent portability with high intensity at a maximum guide number of 42 (ISO 100/m). Due to a dust-, splash-and freezeproof (-10°C) construction, the flash offers reliability when shooting in a variety of environments including rain.

The FC-WR and FR-WR can control multiple flash units remotely from the camera, enabling versatile wireless flash photography. As is the case with the FL-700WR flash, dust-, splash-, and freezeproof (-10°C) design allows use in a variety of fields. The commander can connect to three groups and an unlimited number of flash units.