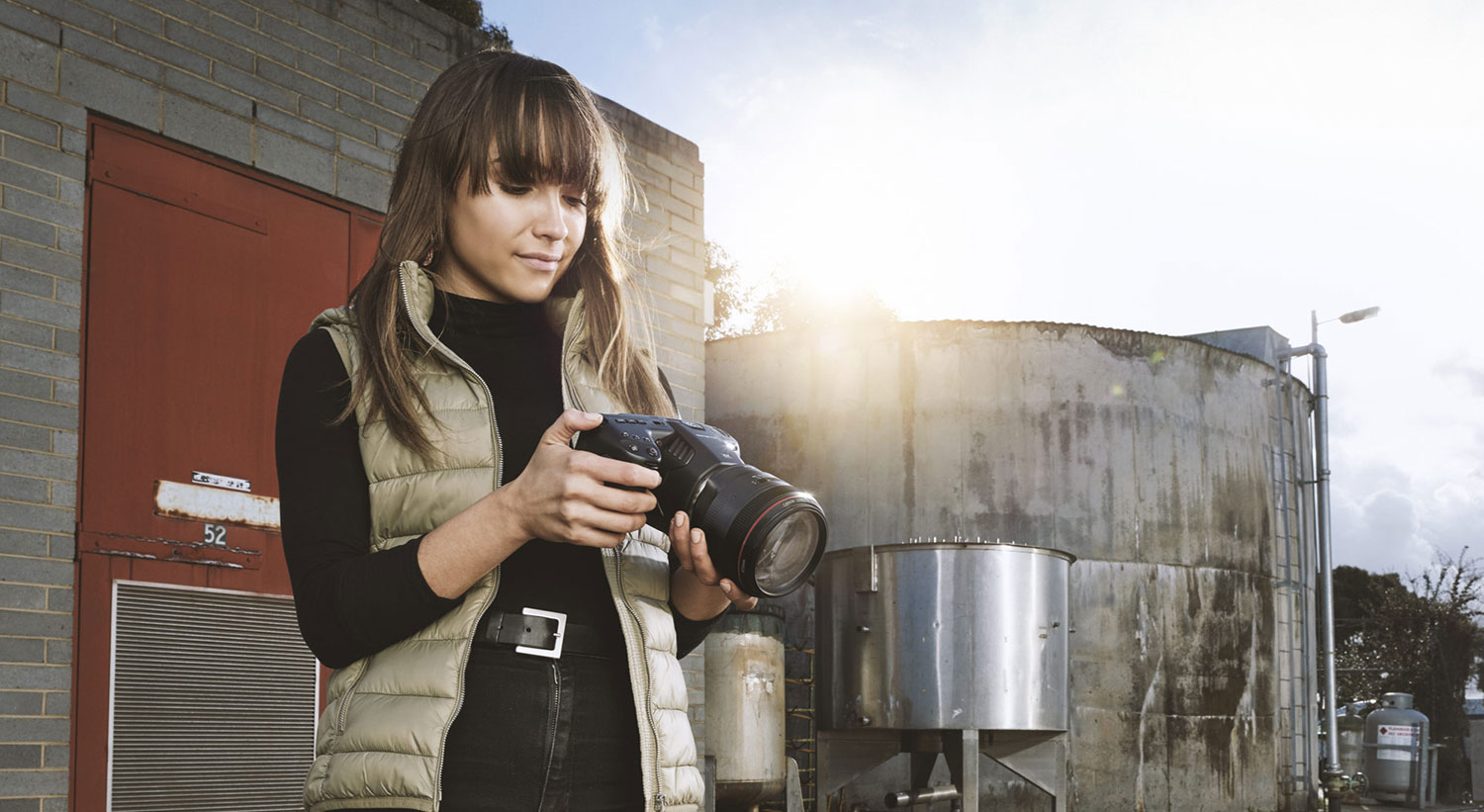 • Up to 25,600 ISO for incredible low light performance

• Records full resolution up to 60 fps or 120 fps windowed

• 3D LUTs can be applied for both monitoring and recording

• Supports still frame capture at up to 21.2 megapixels

• Powers via 12V DC input and can recharge via USB-C

The elegant design of the Blackmagic Pocket Cinema Camera packs an incredible number of high-end digital film features into a miniaturised, handheld design. Made from lightweight carbon fibre polycarbonate composite, the camera features a multifunction handgrip with controls for ISO, WB and shutter angle – right at your fingertips. Because it's an advanced digital film camera, the sensor is designed to reduce thermal noise allowing cleaner shadows and higher ISO valules. Plus, the large 5-inch LCD makes it possible to get perfect focus at 4K and 6K resolutions.

Featuring a larger 6144 x 3456 Super 35 sensor and EF lens mount, the Blackmagic Pocket Cinema Camera 6K lets customers use larger EF photographic lenses to create cinematic images with shallower depth of field, allowing creative de-focussed backgrounds and gorgeous bokeh effects. This means that customers can shoot in 6K and then zoom and re-frame in post-production to allow wide shots and close ups to be created, all from a single camera, whilst retaining image quality.

Blackmagic Pocket Cinema Camera 4K and 6K both have an incredible 13 stops of dynamic range which means they preserve more detail in the lightest and darkest areas of an image than simple video cameras can. This allows filmmakers to set exposure for an indoor scene – such as a cafe and still retain the details of bright outdoor light coming through a window. Customers get even more colours than the standard DCI-P3 colourspace used for feature films.

The Blackmagic Pocket Cinema Camera features dual gain ISO up to 25,600, which means both the 4K and 6K models are optimized to minimize grain or noise in images, while maintaining the full dynamic range of the sensor. The native ISO of 400 is ideal for scenes with on-set lighting. The gain is set automatically, so it's easy to capture great images when you don’t have time to set up lights.

Blackmagic Pocket Cinema Camera records using standard open file formats, so you don’t have to waste time transcoding media. Recording works in industry standard 10-bit Apple ProRes in all formats – up to 4K or 12-bit Blackmagic RAW in all formats up to 6K. Best of all, media files work on all operating systems plus you can format media cards and disks in HFS+ for Mac and ExFAT for Windows.

Blackmagic RAW is a revolutionary new format designed to capture and preserve the quality of the sensor data from their camera. Video formats such as H.264 are highly compressed and add noise and weird artefacts, causing original sensor detail to be lost forever. Blackmagic RAW eliminates this problem and produces stunning images with incredible detail and colour throughout the production pipeline from camera to edit, colour and mastering. It also saves camera settings as metadata so you can set ISO, white balance and exposure in-camera, or override them later while editing, all without any loss of quality. Blackmagic RAW files are also small and fast to use, making them so easy to work with.

The rear of the Blackmagic Pocket Cinema Camera features a large, bright 5-inch touchscreen that makes it easy to frame shots and accurately focus. It’s like getting a built-in Blackmagic Video Assist with the camera. The touchscreen display provides critical information while shooting, as well as menus for setting up the camera and intuitive touch to focus controls. On-screen overlays show status, a histogram, focus and peaking indicators, levels, frame guides, playback controls and more.

With the advanced Blackmagic OS, you get an intuitive and user-friendly camera operating system based on the latest technology. The interface uses simple tap and swipe gestures to adjust settings, add metadata and view recording status. You also get full control over advanced camera features such as on-screen focus and exposure tools, 3D LUTs, HDR, metadata entry, timecode, Blackmagic RAW settings and more.

Featuring the same Generation 4 Colour Science as the high-end URSA Mini Pro G2, the Pocket Cinema Camera delivers stunning, accurate skin tones and faithful colour in every shot. Blackmagic Generation 4 Colour Science uses a complex dynamic 12-bit gamma curve designed to capture more colour data in the highlights and shadows, giving you better looking images. The colour science also handles some of the complex Blackmagic RAW image processing, so colour and dynamic range data from the sensor is preserved via metadata which can be used in post-production. 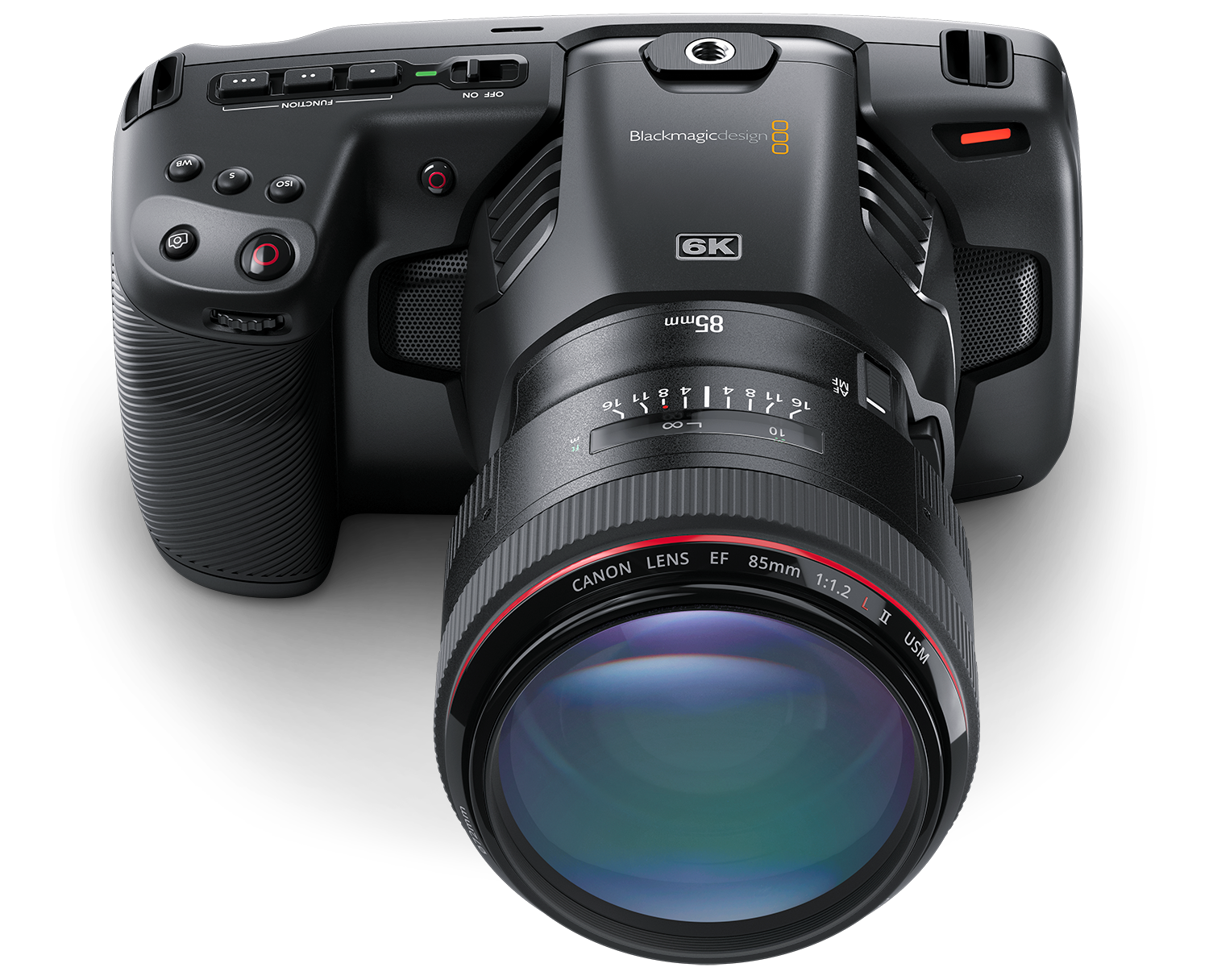 Digital film cameras shoot logarithmic colourspace to preserve the dynamic range, which is great for later post production, however when these files are viewed on a monitor they can look flat and washed out. 3D LUTs solve this problem because they allow you to apply a "look" to the monitor to give you an idea of how the finished images will look when editing. The Pocket Cinema Camera works with industry standard 17- and 33-point 3D LUT files, or you can work with the built-in LUTs such as Extended Video, Film to Video, Film to Rec.2020 and more.

These professional cameras include professional features including a built-in timecode generator, allowing shooting with more than one camera while staying in perfect sync. Simply plug an external timecode generator such as Tentacle Sync into the 3.5 mm audio jack and the camera will automatically detect timecode and lock the internal generator. Now each camera can start and stop recording and all the shots from all cameras will have the same matched timecode. Imagine shooting a music festival with multiple roving cameras. Best of all, new DaVinci Resolve 16.1 will automatically find and sync the shots from all cameras so you don't need to waste time sorting through thousands of shots.

The Blackmagic Pocket Cinema Camera uses standard removable LP-E6 type batteries and also features a locking DC power connector, so you never have to worry about losing power in the middle of a shoot. The USB-C expansion port can also be used to charge the battery from portable battery packs, mobile phone chargers or a laptop computer. You can even add an optional Blackmagic Pocket Battery Grip – allowing you to use 2 batteries to dramatically extend the power of the camera.

"The Blackmagic Pocket Cinema Camera 6K features incredible new 6K imaging and EF lens support that customers have asked for," said Grant Petty, Blackmagic Design CEO. "It has all of the great features customers love from the 4K model, but now adds an EF lens, increased 6K resolution for even higher quality images and more. Plus, with the built-in Video Assist features, customers don't have to purchase and carry around extra equipment. DaVinci Resolve Studio is also included, making it an incredible all-in-one solution that enables anyone to be creative and tell a story."

The Blackmagic Pocket Cinema Camera 6K is coming soon and will be available for hire, HERE.