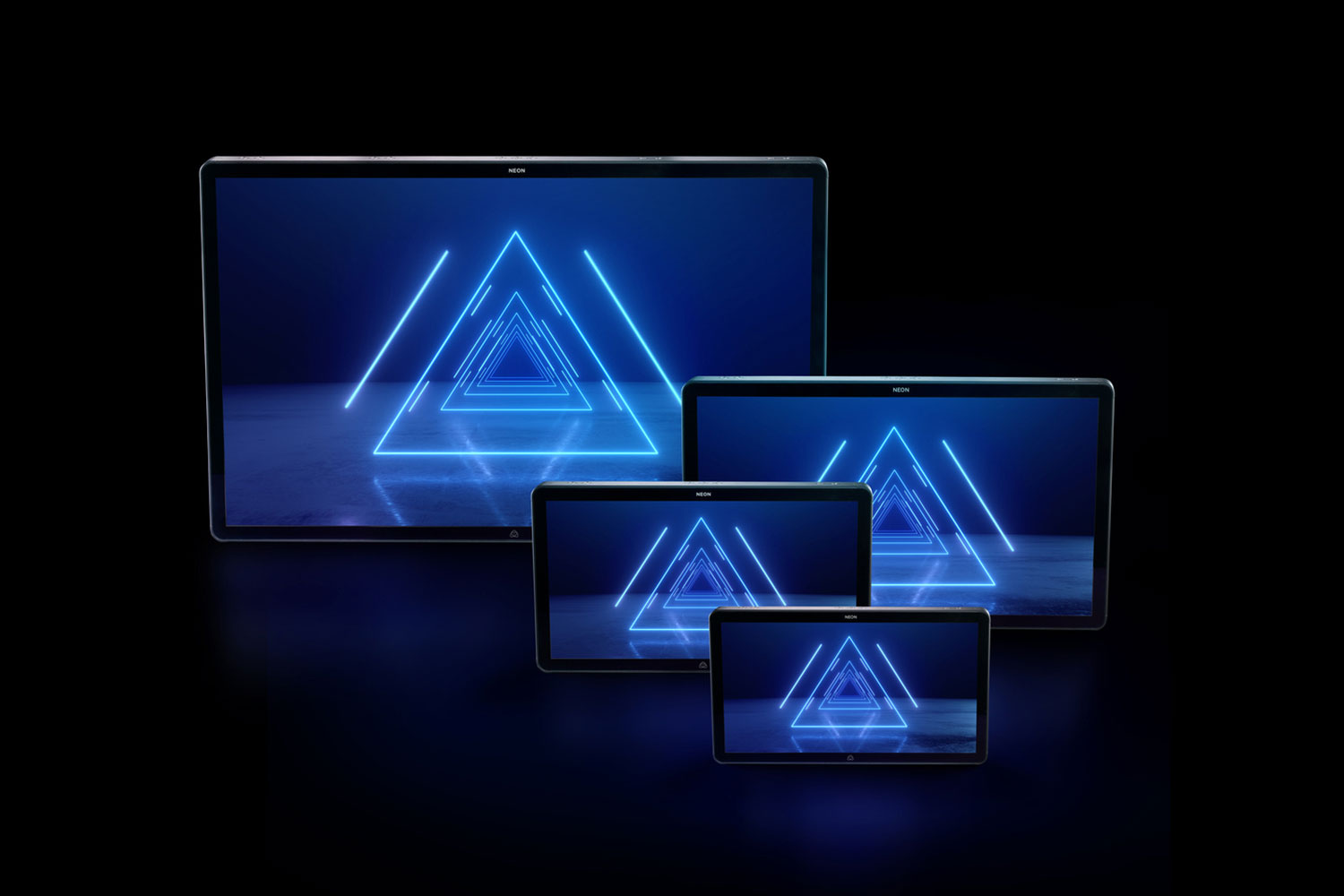 • Neon is an ecosystem of HDR field monitors that saves the creator time by allowing
them to make more decisions in the moment of recording, playback, monitoring and editing.

• Export to any exhibition format without the need of conforming

Port Melbourne, AUS (31 May 2019) - Atomos Limited, (ASX:AMS) (“Atomos”), the global leader in precision monitor-recorders and switchers for the cinema industry and content creators, today announced the introduction of Neon, an all-new line-up of precision 4K HDR field monitor-recorders for on-set or in-studio production where reliable and trustworthy monitoring is essential for the digital darkroom and the video village on today’s sets.

Neon comes in four screen sizes, 17”, 24”, 31” and 55”, ensuring that no matter the critical production usage, every crew member sees an accurate image representation, so directors know with confidence that they have got the shot, so that cinematographers ensure consistent exposure, so focus pullers maintain the sharpness of an actor's eyes, and so editors and colour graders can lock down the creative intent from shot to shot. The four sizes are ideal for different creator and crew requirements: 17” for focus pullers and as an onset buddy reference monitor for laptops. The 24” and 31” is perfect for the video village, DIT, cinematographer, editor, director and a reference monitor for an iMac or Mac Pro. The 55” is a must have for clients, showrooms and colour graders.

"The new Neon series of cinema monitor-recorders are once again definitive examples of Atomos continuing to lead video capturing technology in the cinema industry in the most robust and efficient way possible and – most importantly – at the highest levels of fidelity that creators need," notes Jeromy Young, CEO of Atomos. "For nearly a decade we’ve innovated and delivered the best video monitor and capture products that support demanding on-set requirements and with Neon I could not be prouder of how the Atomos team has elevated our commitment of delivering what today’s cinema leaders need to
produce their best content.”

In an industry first, Neon deliberately does away with touchscreen operation and is Bluetooth controlled by the powerful Atomos iOS App. Recording control has never been easier for any production whether it is a single camera or a multi-camera setup. The App controls 4K recording, syncing and playback on up to 1000+ Neons via Bluetooth; and real-time production tools like focus peaking, exposure, calibration, zoom, waveform monitor, RGB monitor, vectorscope and LUT selection. 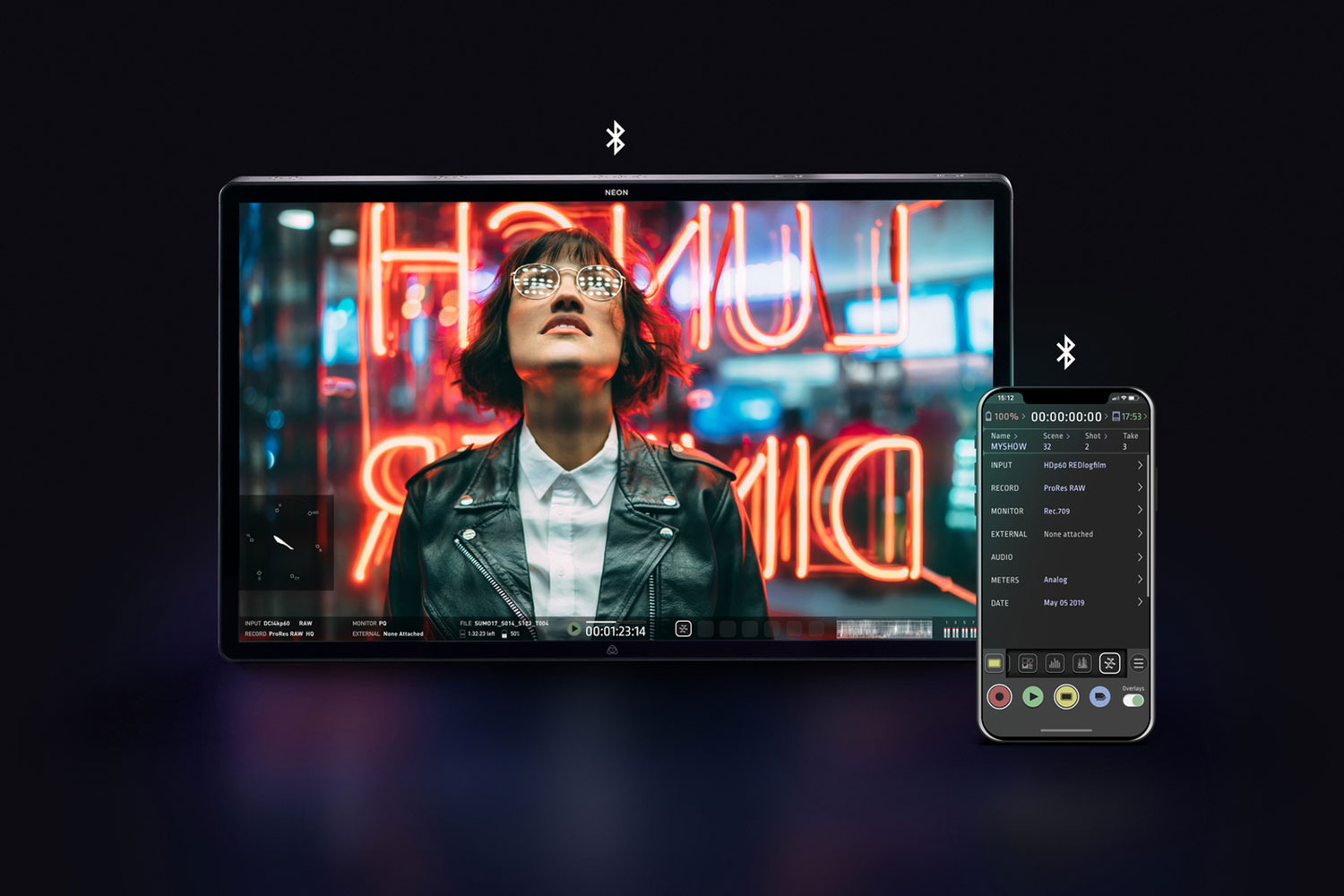 The App also shortens the time between capture and final edit by allowing Neons to display real-time playback of captured shots at up to 4Kp60 in ProRes RAW, ProRes, Avid DNx and Cinema DNG. Additionally, all Neons and any Ninja V with an AtomX Sync Module attached now perfectly frame sync together with the touch of a few buttons on-set via the Atomos iOS App making for effortless importing of synced video and metadata to the editing suite at the end of filming. The metadata is embedded into the quicktime .mov file and is read downstream by computer applications, including Atomos desktop software. With Neon, capture control has never been so easy.

With Neon, the innovative Atomos and Dolby partnership continues with the incredible ability to deliver Dolby Vision live on-set to any Dolby Vision capable TV or monitor. Neon’s AtomOS 10 software magically, automatically analyses the image, queries the TV, and applies the right Dolby colour and brightness profiles in real-time for the maximum HDR image on the display or TV, all while your filming. This is a valuable on-set reference check for the creative director and client to ensure continuity of creative intent right to the living room.

Online only - the online/offline headache gone forever
Neon simplifies the production workflow by recording, editing, grading within the online environment using ProRes RAW, eliminating the need for conforming via an online and offline process (e.g. ARRI RAW + Avid DNx). Different exhibition formats can then be easily exported rather than through the time-consuming process of separate conforms.

Atomos brings zone backlight technology to the entire range of Neons with their Dynamic AtomHDR technology – providing up to 512 zone backlights per display. This yields a contrast ratio from one to a million gradations on discrete parts of the image on Neon’s daylight viewable anti-reflection 1000 nit displays. With the Neon series, blacks and colours are rich and deep. Images appear to ‘pop’ with added dimensionality and detail. The precision Atomos display uses a unique combination of advanced LED and LCD technologies which together offer deeper, better blacks than rival OLED screens, but with the much higher brightness and vivid colour performance of top-end LCDs. Objects appear more lifelike than ever, with complex textures and gradations beautifully revealed. In short, the Neons offer the most detailed window into an image, truly changing the way you create visually – and because you are viewing and recording RAW, the post production flexibility is, well, RAW flexibility.

Display technology moves fast, so an investment shouldn’t be locked into older formats and functionality. Neon is future-proofed because of the innovative Master Control Unit, a replaceable brain that allows the out-of-the-box 4K capture capability to be upgraded later as newer functionality and technology becomes mainstream. The Master Control Unit is also compatible with the AtomX expansion modules that provide SDI and NDI connectivity on top of the standard HDMI connectivity that comes with Neon.

ProRes RAW – the best of RAW and ProRes combined

Neon captures ProRes RAW video to unlock the true potential of the RAW cinema camera and provides complete control of the video image at the highest quality possible without slowing down the edit. ProRes RAW offers the performance of ProRes and the flexibility of RAW.

Built for the toughest production environments

The Neon withstands the most extreme production conditions with its durable aluminium chassis and polycarbonate back plate. The 17”, 24” and 31” Neons additionally come packed in their own custom designed high-performance crush-proof and water-tight road case. Mounting points include VESA mounts, feet for floor or desk viewing, and ARRI-standard edge mounting points.