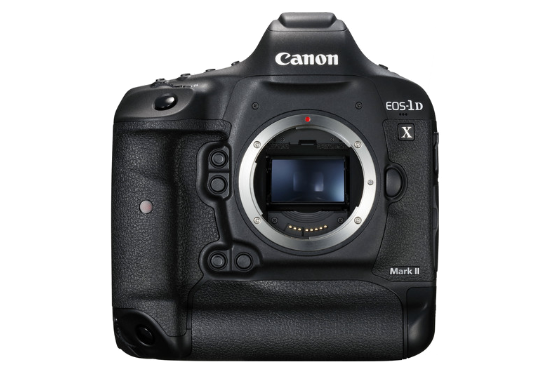 A 20.2 Megapixel full-frame CMOS sensor with high latitude, developed and made by Canon, reduces noise at both high and low ISO speeds. This exceptional sensor features gapless microlenses to ensure high image quality under all shooting conditions. Gapless lenses mean that no light is lost between each pixel as all the light falling on the sensor is funneled into the pixels below. This improves light gathering capacity and increases the signal-to-noise ratio.

With increase in the number of recording pixels, compared to the EOS-1D X, the 20.2 MP in EOS-1D X Mark II enable more cropping abilities while still retaining exceptional level of detail. At the same time, the increased exposure latitude allows compositions to be over and/or under exposed without much loss of details.

A high ISO range offers a wider range of shooting opportunities. Speed is of the essence in any professional situation, and greater ISO flexibility is particularly useful when shooting in low-light and near-dark locations. How high an ISO speed you can shoot at and yet still retain critical image quality has always been the big quest, which is where EOS-1D X Mark II scores. With a top native ISO speed of 51200, the EOS-1D X Mark II can be expanded further still to ISO 409600 for shooting in very dark locations. And flexibility doesn't stop there. Even in Auto ISO mode shutter speeds up to 1/8000sec are possible, as is exposure compensation in Manual mode.

1 Lens correction data is not required for diffraction correction

2 Certain lenses do not have lens aberration correction data

With the EOS-1D X, Canon’s Digital Photo Professional software provided solutions for correcting various lens and image aberrations. On the EOS-1D X Mark II, these correction functions are built into the camera with a dedicated Digital Lens Optimizer function.

Digital Lens Optimizer imitates lens performance, with a series of mathematical functions replicating each stage of the journey of light through the optical path. Using this information, the Digital Lens Optimizer can correct a range of typical optical aberrations and loss of resolution caused by a camera’s low pass filter, by applying an inverse function to each shot to take the image nearer to how the scene appears to the naked eye. This creates detailed, high-quality images providing photographers great flexibility of working with large or small apertures without worrying about aberrations and diffractions.

While the lens aberration corrections can be applied to JPEG files as the images are being shot, Digital Lens Optimizer is applied during in-camera RAW processing.

The ‘Fine Detail’ Picture Style originally developed for the EOS 5DS and EOS 5DS R has been included in the EOS-1D X Mark II to maximise the amount of detail captured by the cameras’ 20.2 Megapixel sensor. This setting prioritises gradation of tones and emphasises fine detail. Fine Detail is intended for images that will be used straight from the camera, without post-production.

Fine Detail Picture Style features three adjustable sharpening parameters, which give more control over the sharpening performed in-camera on JPEG files. The parameters are similar to those found in the Unsharp Mask filter in Adobe Photoshop and Canon’s DPP software.

The ‘Strength’ slider adjusts how much sharpening is applied to edges in the image. The ‘Fineness’ slider determines the size of the details that are sharpened, move it to the left to sharpen smaller details. The ‘Threshold’ slider specifies how much contrast there needs to be in a part of the picture before it is considered an edge and sharpened. At low settings even subtle edges can be sharpened.

The EOS-1D X Mark II features a choice of Auto White Balance (AWB) settings that take a different approach to artificial light. ‘Ambience Priority’ aims to retain some of the warm colour tones from artificial light sources in order to preserve some of the atmosphere of a scene, similar to the conventional AWB setting on other EOS cameras, while ‘White Priority’ eliminates most of the warmth from tungsten lighting and tries to give colour-neutral images where possible.