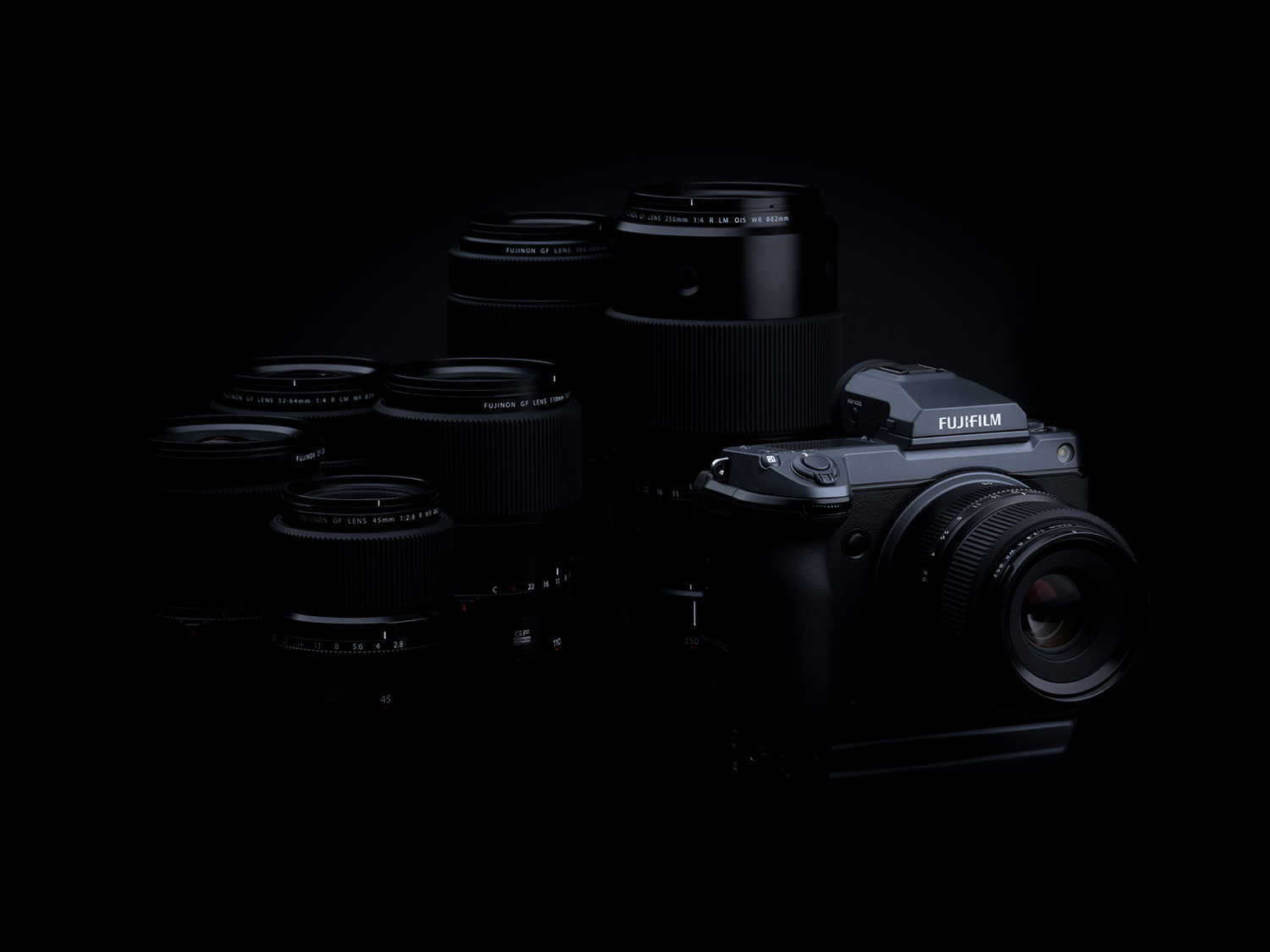 FUJIFILM Corporation (President: Kenji Sukeno) has announced the release of the GFX100 mirrorless digital camera featuring a newly developed 102 megapixel approx. 55mm diagonal length large format sensor. The new camera will be the flagship model of the GFX system of mirrorless digital cameras, which have received strong praise from professional photographers and photo enthusiasts for their use of a 43.8mm x 32.9mm large format sensor, which is approximately 1.7 times larger than a 35mm ‘full frame’ sensor.

The GFX100 features a “back illuminated sensor with phase detection pixels,” the first of its kind for image sensors larger than the 35mm full frame format. Autofocus speed is up to twice as fast as previous GFX models (when using the GF63mmF2.8 lens), whilst also offering Tracking AF on a moving subject as well as more accurate continuous AF. Another world’s first for larger than the 35mm full-frame format cameras is the in-body image stabilization (IBIS), delivering “five-axis image stabilization” of up to 5.5 stops*1 As a result, ultra high-resolution photography can be achieved, even when shooting hand-held. The video capability has also been greatly improved, to become the world’s first mirrorless digital camera with an image sensor of this size or greater to offer 4K30p video recording capability (10bit 4:2:2).

With these three “world’s first” features, the GFX100 is a camera of unparalleled innovation and versatility, fulfilling its purpose of “capturing and recording precious moments that will never be repeated again” at the highest image quality possible in a mirrorless camera.

*1 Based on CIPA standard. Pitch/yaw shake only. With GF63mmF2.8 R WR lens mounted.

The new sensor, specifically developed for this camera, measures approx. 55mm diagonally and boasts an effective pixel count of approx. 102 million. When combined with the fourth generation “X-Processor 4” processor, it delivers the world’s highest level of image quality with exceptional colour reproduction unique to FUJIFILM and the ultra-sharp FUJINON GF lenses.

The sensor has 3.76 million phase detection pixels across the surface (approx. 100% coverage) enabling fast and accurate AF regardless of where a subject is within the frame. This sets a completely new standard in the dynamic mobility of large format mirrorless digital cameras.

The sensor’s “back illuminated” structure receives a greater amount of light accurately whilst achieving better noise performance. The sensor has lower noise, greater dynamic range and faster readout despite the higher pixel count.

Generally speaking, the higher the pixel count an image sensor has, the higher the likelihood of camera shake. To avoid this threat to image quality, FUJIFILM has designed an IBIS system specifically for the new 102MP large format sensor which gives up to 5.5 stops of image stabilization (when using the GF63mmF2.8 R WR). The IBIS sensor shift mechanism ensures images are stabilized not only against pitch and yaw movements (up / down and right / left tilting) but also against shift (horizontal) and roll (rotational) movements. 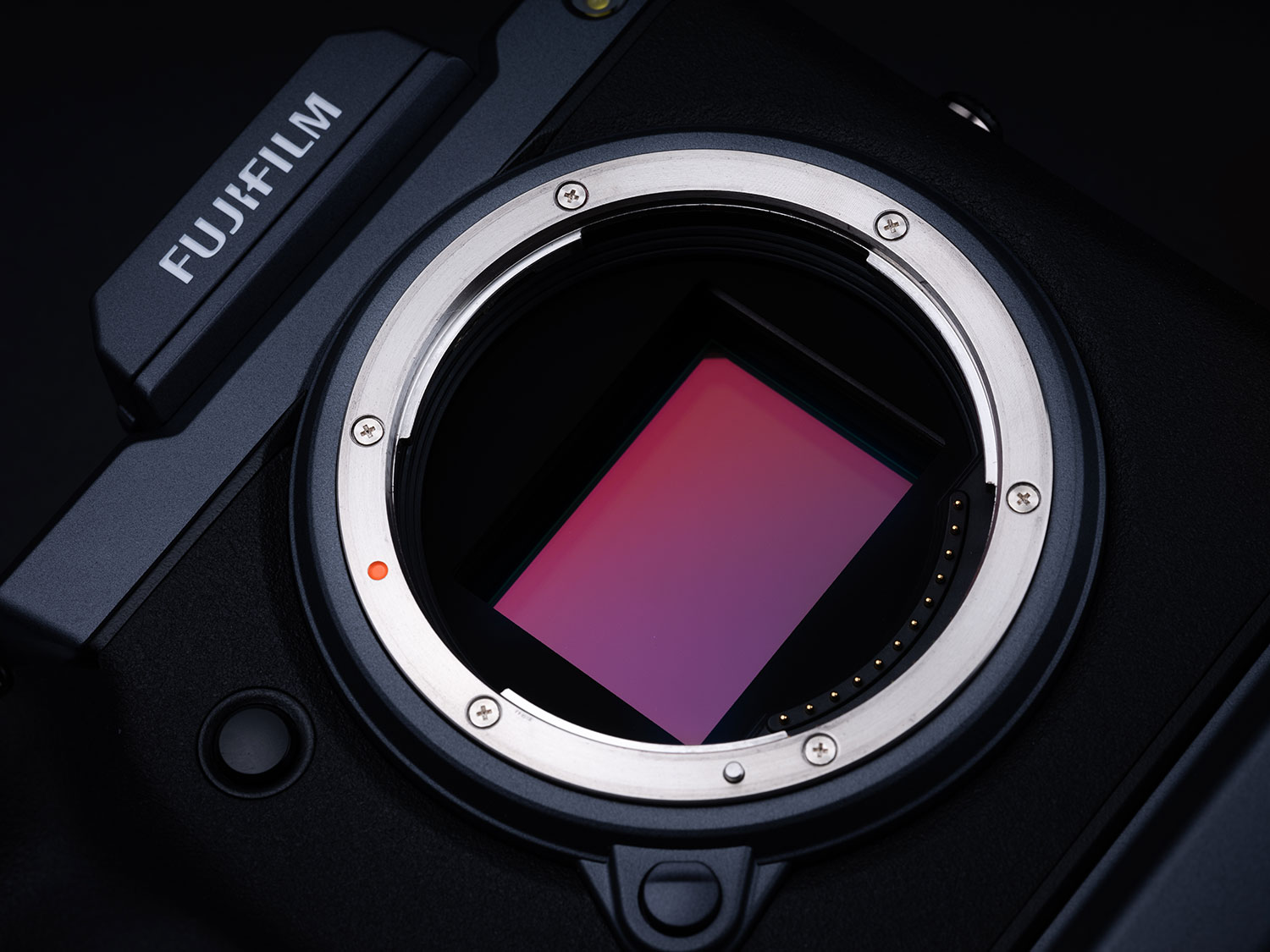 The combination of the new image sensor with high speed readout and the high performance fourth generation “X-Processor 4” engine has given the camera the ability to record 4K30p video (10bit 4:2:2 externally and 10bit 4:2:0 internally), a world’s first amongst large-format consumer mirrorless digital cameras carrying a sensor bigger than the 35mm format.

When the standard digital cinema format (17:9) is selected, the GFX100 records video with a sensor area measuring 43.8mm (W) x 23.19mm (H) and 49.56mm diagonally, making it easier than ever before to shoot high quality video with shallow depth of field, wide tonal range and high ISO sensitivity. The GFX100 produces footage with more detailed textures whilst reproducing three dimensional definitions and the very atmosphere of the scene.

The GFX100 uses oversampling with the data equivalent to approx. 50.5 megapixels to render video. It also supports the highly efficient H.265/HEVC codec, as well as “F-Log” which has a gamma curve with a wide dynamic range and the “Hybrid Log Gamma (HLG)” for recording HDR footage with ease. The GFX100 is also the first model in the GFX System to incorporate the “ETERNA” cinema film simulation mode, delivering optimum solutions that reflect videographer’s intentions and facilitates a variety of creative expressions.

The GFX100 is the first FUJIFILM mirrorless digital camera to incorporate an integrated vertical grip. This has led to a thinner form factor that is comfortable to hold in your hand, despite accommodating IBIS and two batteries in the body.

In order to maximize the capabilities of the 102MP image sensor, the GFX100’s “core imaging unit” which consists of the lens mount, image stabilization mechanism and image sensor, is as isolated from the main body panels as much as possible. This “double structure” design ensures a high level of precision and robustness while minimizing any loss in image quality caused by external stress to the body.

Weather sealing is applied to 95 locations across the camera body to achieve an advanced
level of dust- and moisture-resistance, so that the camera maintains reliable operation even in the toughest conditions.

The GFX100 features a 1.80 inch sub LCD monitor on the top panel and a 2.05 inch sub monitor on the rear panel for even more versatile information display. They show EXIF data, histogram and camera settings in large text. Various information can be allocated to each of the monitors (EVF, rear-panel LCD displays and top-panel sub LCD display) to make the viewfinder less cluttered and easier to use. 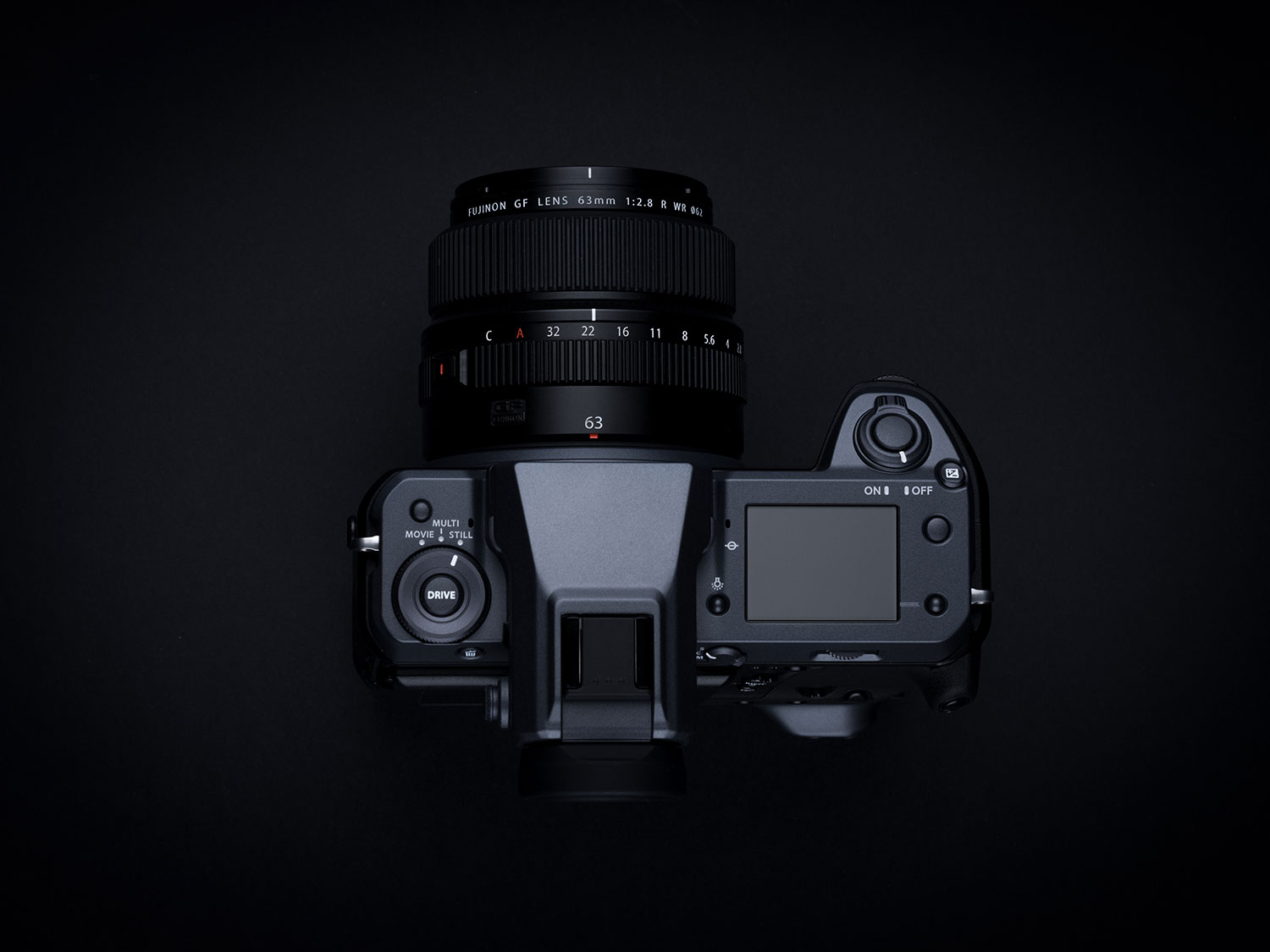 This ensures clear information visibility when tethered shooting or when the camera has to be placed in a position that makes it difficult to see the viewfinder or either monitors/LCDs. Furthermore, for users who prefer dial-based operations, a characteristic of previous GFX cameras, the GFX100 has a “Virtual Dial Mode,” which displays the image of a dial on the top panel sub LCD monitor that can be rotated and adjusted with the front and back Command Dials. 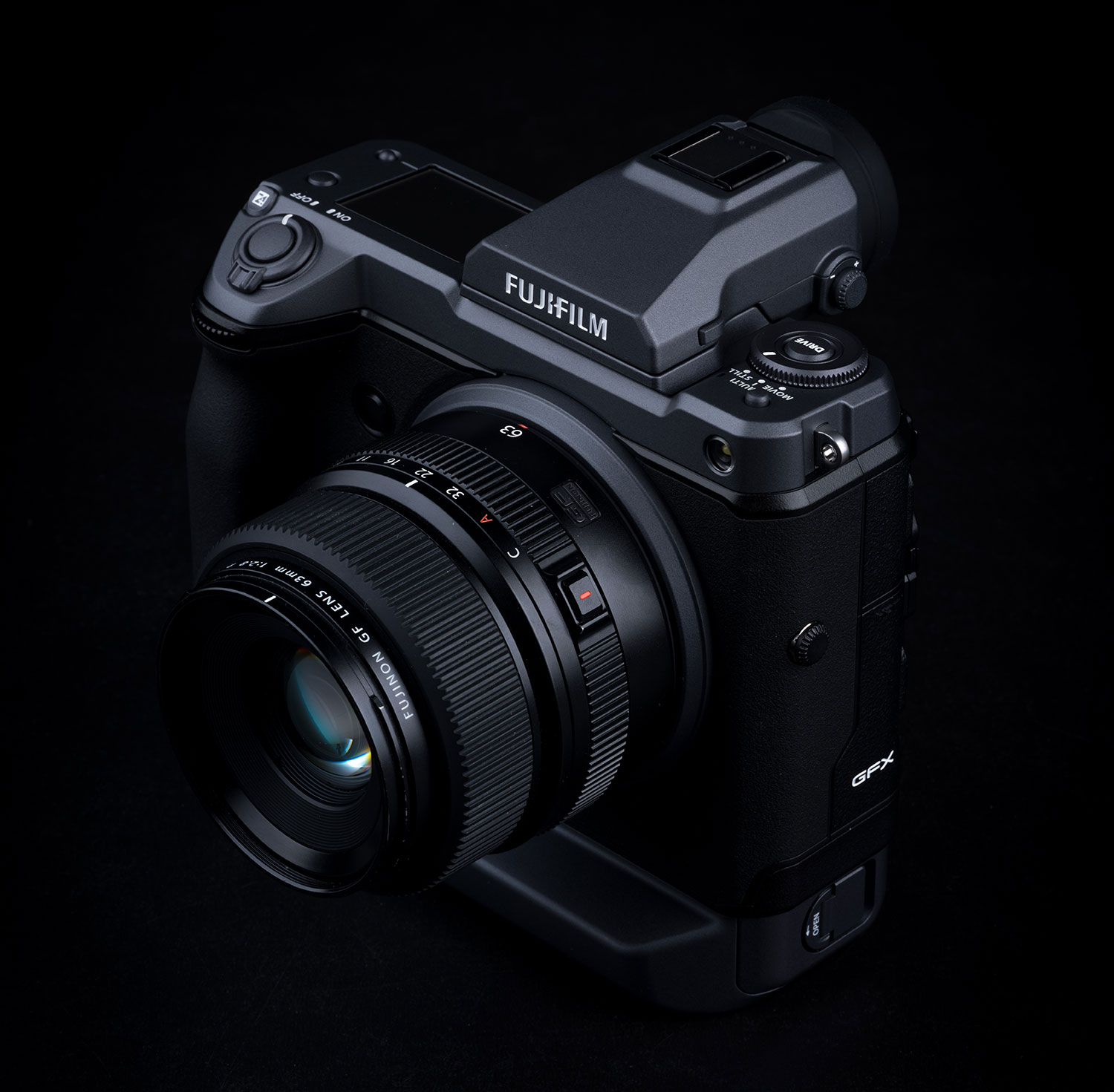 Buttons and levers for camera operations have been kept to a minimum for simple and easy to understand handling, whilst ensuring that you can hold the camera comfortably in the hand. On the left shoulder of the camera body is the Drive Mode Dial, which enables instantaneous switchover between Still Image, Video and Multiple Exposure modes. You can store camera settings for each of the modes (exposure settings, white balance, Film Simulation, etc.). Even when you need to shoot both stills and video in a single session, it only requires just a single dial movement to recall your preferred camera settings.

The GFX100 inherits GFX 50S’s popular detachable EVF system that can be adjusted to various angles when using the EVF Tilting Adapter EVF-TL1. The world’s highest resolution 5.76 million dot OLED panel has been used to develop the GFX100 high definition EVF unit. The viewfinder has a magnification of 0.86x and contains five optical glass elements including aspherical elements and has been specifically designed for the 102MP sensor, which requires extreme focusing accuracy.

The EVF can be set to the “Frame Rate Priority,” “Resolution Priority” or “AF Speed Priority” mode according to subject characteristics and the needs of the photographer.

The rear panel monitor uses a 3.2 inch 2.36 million dot touchscreen LCD that can be tilted to three directions.

The GFX100 is the first model in the GFX System that uses Fujifilm’s phase detection AF algorithm, adopted from the fourth generation X Series cameras (X-T3 and X-T30), and which is praised for its precision and speed. The algorithm makes full use of 3.76 million phase detection pixels, placed across the entire sensor, to set a new standard in AF speed and precision for large format cameras performing the standard “Single Point” AF as well as “Zone” and “Wide Tracking” AF. The effect is particularly noticeable when using prime lenses with a heavy set of focus lens elements, achieving speed improvement of up to 210% over the conventional contrast AF system.

At the same time, the GFX100 boasts dramatic improvement in the accuracy of Face and Eye Detection AF, which has become an essential feature for fashion and portrait photographers. The Face Detection function now works at a greater shooting distance, and shows significant improvement in tracking the side profile of a person or when a person moves erratically within the frame, while also maintaining focus on a subject that goes behind an obstacle.

Various other new functions and features

The GFX100 can accommodate two NP-T125 batteries, extending the number of frames per charge to approx. 800 when the rear LCD is used.

The camera can be powered and charged through the USB-C connection. Connecting an external battery that supports USB Power Delivery enables even longer continuous shooting and simultaneous charging of the two batteries in the camera.

This is the first GFX Series model that has a supports IEEE802.11ac 5GHz, enabling even faster wireless image transfer.

Similarly to previous GFX models, the GFX100 is compatible with “Tether Shooting Plug-in PRO for Adobe® Photoshop® Lightroom®” and “Capture One Pro FUJIFILM” for RAW processing and tethered shooting to accommodate the workflow of any professional photographers.

The Fujifilm GFX100 medium format camera is expected to be available for hire from late June 2019, HERE.