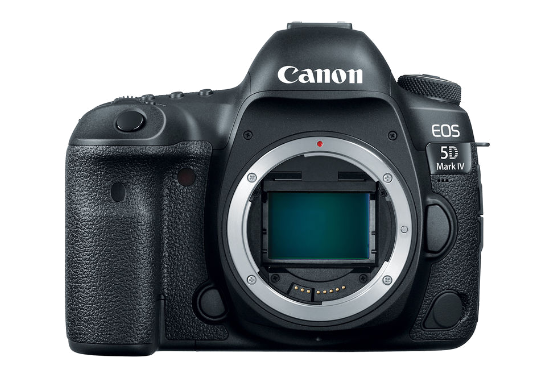 If this item is not available, check out the OEM version, HERE.

Designed to perform in every situation, the EOS 5D Mark IV is beautifully engineered and a thoroughly accomplished all-rounder. Full-frame EF mount.

Designed to perform in every situation, the EOS 5D Mark IV is beautifully engineered and a thoroughly accomplished all-rounder.

Canon Log is a staple feature in Canon’s Cinema EOS range and is designed to deliver an 800 percent increase in dynamic range, minimising the loss of detail in the darkest and brightest parts of the image. When using Canon Log on the EOS 5D Mark IV, an ISO setting of 400 will deliver the largest dynamic range of 12 stops, perfect for shooting in difficult lighting conditions.

Ensuring maximum freedom in post-production, Canon Log alters the image processing data after the image has been captured. As a result, videographers and filmmakers will find it easy to colour match with footage shot on other cameras, including those in the Canon Cinema EOS range. The footage from any camera can be combined and colour matched in a single colour grading process, which provides a final global colour and seamless feel, regardless of whether the film is shot on different cameras.

Because the devil is in the detail from the moment light passes through the lens, the EOS 5D Mark IV captures every nuance, every colour, every detail. Once again Canon has brought finer dimensions in detail thanks to a new sensor capable of extraordinary clarity. See your world like never before.

Capture detail. Capture everything
A 30.4 Megapixel CMOS sensor delivers images that are packed with detail and low in noise, even in bright highlight and dark shadow areas. A finer resolution means nothing is lost, allowing you the freedom to crop in for the perfect shot and retain the quality.

The Dual Pixel sensor’s pixels have a dual photodiode construction. This sensor design means the sensor can receive an A and B signals from the subject and to detect any phase differences between the two signals, allowing them to attain focus as part of the Dual Pixel AF system. When capturing the image, the sensor obtains the picture info from the combined A and B image signals. This technology making both focusing and image shooting possible with the same sensor.

Image Microadjustment
When an image isn’t quite sharp enough in a specific area, such as on a subject’s eyes for example, it’s possible to adjust the image and bring sharpness back to a desired area.

Bokeh Shift
With Dual Pixel RAW it is possible to adjust the position of out of focus areas, or ‘bokeh’ to enhance composition, for example moving an out of focus object that is obscuring the subject.

Ghosting Reduction
Unlike lens flare, which can sometimes be used creatively in making an image appear low in contrast and atmospherically ‘hazy’, ghosting is not desirable and shows internal lens reflections. This can be controlled with Dual Pixel RAW and minimized with careful adjustment.

For best results
Getting the most from Dual Pixel RAW requires careful adjustments of the EOS 5D Mark IV's shooting values. For the best results, shoot at a lens focal length of at least 50mm and an aperture of f/5.6 or lower, ensuring the ISO value is 1600 or lower.

Exceptional low light capture
Low light performance is improved at every ISO setting, with much reduced digital noise and a maximum sensitivity of ISO 32,000 (expandable to ISO 102,400). Be confident of superb image quality even when shooting in poor light.

Next level image processing
Built-in Lens Aberration Correction improves lens performance by compensating for factors like diffraction, distortion and chromatic aberrations to produce an image which is visibly superior.

Clarity, contrast and colour
The 5D Mark IV features a choice of Auto White Balance (AWB) settings that take a different approach to artificial light. ‘Ambience Priority’ aims to retain some of the warm colour tones from artificial light sources in order to preserve some of the atmosphere of a scene, while ‘White Priority’ eliminates most of the warmth from tungsten lighting and tries to give colour-neutral images where possible.

Every detail carefully captured
The ‘Fine Detail’ Picture Style has been included in the 5D Mark IV to maximise the amount of detail captured by the cameras’ 30.4 Megapixel sensor. This setting prioritises gradation of tones and emphasises fine detail.